Catching Big Pike on a Fly on Remote Esnagi Lake 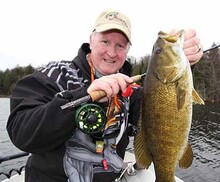 Since I was a young boy I have had a love of catching big northern pike. Now as an adult, I try to find new and exciting waters to catch them. Recently I had the pleasure of fishing on a lake system that not only boasted of big pike and walleye -- but also large brook trout as well. The lake is Esnagi Lake and the lodge I stayed at is Lodge Eighty Eight. The MacLachlan Family have been in the resort business since 1959 and this location is one of their best. The pike I caught averaged 30 to 35 inches with the odd fish in the 40- to 45-inch size. These are heavy 20- to 30-pound fish, which are exceptionally aggressive. Though I was fly fishing, I was told that many anglers use conventional tackle for topwater, using popular surface lures to catch these leviathans. The strikes are always vicious. For anglers, the sight of a massive pike crushing their lure on the surface is the ultimate experience. In addition, on smaller nearby lakes they have healthy populations of brook trout, which weigh up to 5 pounds. Whether with a dry fly or a spinner, the brookies were very hard-hitting, especially in the early morning and later afternoon/evening. Some northern pike caught on Esnagi Lake can be up to 40 to 45 inches long. (Photo credit: The New Fly Fisher) I was really impressed with the staff at Lodge Eighty Eight who were very helpful in getting us onto fish. The nice thing about Esnagi Lake is that it seemed virtually everywhere we fished we found lots of walleye and pike. Best of all, they were all of good sizes thanks to their catch-and-release program. Lodge Eighty Eight can be accessed by floatplane or train! Watch the clip for techniques, equipment and flies for catching big Pike on this episode of The New Fly Fisher: Colin McKeown is the producer of The New Fly Fisher Television Series, and several documentary series for the Outdoor Life Network, the Discovery Channel and the History Channel. With a passion of fly fishing, Colin's goal is to help both novice and veteran fly fishers everywhere by giving them a top-quality fly fishing series that will make them better anglers. Known for his keen sense of humour, Colin has two wonderful children and is married to the most understanding and patient woman in the world.