An ATV quest for a mysterious relic

Local folklore tells of an abandoned steam train. An intrepid ATVer decides to seek it out. 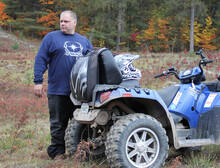 Call it a myth, folklore, or an urban legend: everyone I have spoken to about this has the same response: “Yeah, I heard about an old steam locomotive wreck up there.”

Peter Searle, Executive Director of the Park to Park Trail Association, had heard of these stories for years, when he decided this fall to take action. Calling on club members, friends, and local residents he has cross-referenced all the information and nailed the area down to a few square miles north of the Sequin Trail, only accessible now by ATV.

In an attempt to locate and document the wreck before winter sets in, a group of seasoned ATVers are heading in to the unknown to solve the mystery, and locate the wreckage.

Our quest to locate and document the steam locomotive was all kinds of fun, and we covered a huge amount of some really gnarly trails. We unfortunately did not find the locomotive, however we did learn of a hidden ghost town deep in the bush north of the area we rode.

We all arrived in Bear Lake on Sunday night, and the folks at Lighthouse Cottages & Camping were kind enough to put us up in their recently winterized cabin. We spent the evening enjoying the fire, looking at maps, and for me, learning about the Seguin Trail.

Monday morning arrived, and we all headed out dressed in multiple layers to ward off the cold. We could have left on our ATVs right from the resort, however we chose to unload right at the Seguin. Not 500 feet east of the parking area, we headed north away for the Seguin and through some really great, challenging trails. The route was wide at first, but as we passed a few hunt camps, the trail diminished to a thin, winding path that only an ATV could manage. All day we explored different fingers of trails, all looking to the side hoping to catch a glimpse of the train. Most trails ended at scenic lakes with small clearings that we noted were just right for a tent. At our farthest point we reached Fifteen Mile Lake, a beautiful site, secluded and quiet, and probably very inviting on a warm day to those who like to swim.

We headed back to the Seguin, with one more lead to follow, a trail to the south, oddly enough, just west of where we had parked. Our source had described it as a few minutes' ride west of the parking area, with two steel bridges on the trail leading to where parts of a steam locomotive had been spotted. We almost missed it, and turning back we noticed a steel bridge visible from the Seguin. Excitedly we followed the trail a short piece, now more than ever inspecting the brush beside the trail. We ended up at the end of the trail, in the back of a hunt camp ... and still no wreckage. The folks at the camp had not heard of the wreck, but told us of the hidden town, miles in the bush, abandoned for many years near an old mine. Peter Searle of Park to Park checking the depth before we proceed.

Heading back to pack up for the day we did not feel defeated: rather, we had simply finished the first step of many in exploring the area, and the hidden treasures it held. Upon returning home, and inspecting the satellite view of the area, I found an odd collection of what must be abandoned roads in a cluster, far in the bush (marked on the map below), leading me to believe that a return trip will be required in the spring.

Here is a map of the adventure.

If you have any information to offer regarding this or any other hidden spots on trails please feel free to email me mark@atvfanatic.ca

Follow along with ATVfanatic for updates, or check back to this article for more details when published.

Mark Hamerton Ontario facinates me; the farther I go in the bush, the more I feel at home. I love showing people new riding areas, and the countless stunning locations you can get to on an ATV.