How do Ontario trails stack up against the ATV big dog—the Hatfield-McCoy? 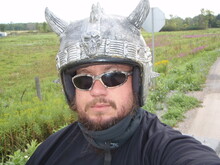 By Dave Baker
Dave Baker is an avid outdoors enthusiast. You can usually find him hunting, fishing, trapping, and ATVing somewhere in Ontario.

I've been riding ATVs in Ontario my whole life. Until recently, I was even the president of the Ontario Federation of ATV Clubs. For years, I'd been told I had to check out West Viginia's famed Hatfield-McCoy trails. After missing a chance in 2015, I finally got down there in the fall of 2019. I had to find out for myself—how do they stack up against Ontario riding?

We planned on hitting four of the six trails that were open—Indian Ridge, Pocahontas, Pinnacle Creek, and Rockhouse. I wanted to see how they compared to ATV trails in Ontario such as:

Much like the OFATV, KATVA, HATVA, and EOTA trails that together account for the majority of the massive trails system in Ontario, the trail difficulties at Hatfield-McCoy ranged from easy to “if I don’t make it, tell Mother I love her.”

The number one biggest question I was asked over and over upon returning was, “What were the trails like?” And the two words that best decribe them are switch backs. Up, switch-back, up, up, switch-back-up, then down, switch-back, down, switch-back, down. The terrain was similar to the terrain of the Canadian Shield in Renfrew County ATV Club and Kawartha Lakes ATV Association, except every trail was on the side of a cliff. There was always a cliff on your left or on your right. The views were spectacular. The elevations and elevation changes were magnificent.

Now, one of the things I wasn’t expecting was how many people I met riding in West Virginia who wanted to know about riding in Ontario. And you know what? My opinion may be biased as I have ridden all over Ontario, but Ontario trails are right up there.

Ontario is home to a wide diversity of trails

West Virginia and the Hatfield-McCoy trails are great, a must-visit destination. But the diversity and sheer number of trails across Ontario make it a must for ATVers from all over North America. Your bucket list really isn't complete without Ontario on it.

What You'll Find on the Hatfield-McCoy Trails

Bore holes speak to the area's past industrial activity

Every great ATV trails system has one: the mysterious abandoned vehicle

We visited and geocached at historic sites such as the Hatfield Cemetery, the final resting place of Devil Anse himself.

Successful geocaching!
Lots of interesting history around these parts

Ontario has diverse trail systems all over the huge province. You can go for a ride in Ontario and pass dozens upon dozens of scenic lakes in a single day, tackle tough terrain over the Canadian Shield and through vast forests, or get some distance on numerous rail-trails joining trail systems together across the province.

Ontario has a huge network of well-maintained ATV trails

And just like in West Virginia, you'll find lots of historic sites and cool abandoned stuff all over Ontario trails. You can explore ghost towns and abandoned mica mines. You never know what you'll find when you're way out there in the bush!

Abandoned boiler on Ontario's Kawartha ATV Association trails
An old mica mine entrance speaks to Ontario's industrial past
And of course, an abandoned school bus on Ontario ATV trails

Planning a Trip to HAtfield-McCoy

All of the resorts, ATV-friendly towns, and restaurants were fabulous. There’s a rich history of coal mining towns now embracing ATVers coming to visit and eat at their establishments.

The accommodations on our Hatfield-McCoy trip were great, the trails were well marked, everyone was friendly and helpful, and we pounded out just over 700 km (435 miles) over the span of the week.

Planning a Trip to ONtario

There are thousands of kilometres of trails to ride, and as many or more ATV-friendly towns, amazing places to stay, and restaurants for you to explore and enjoy.

Ontario has a fantastic trail navigation system with the QuadOn app, to have all of the OFATV trails at your fingertips with a smartphone and five bucks. You’ll find the trail signage and navigation signage in Kawartha Lakes ATV Association and Renfrew County ATV Club matches the signage in Hatfield-McCoy, so it’s not unfamiliar to those who have ridden the Hatfield-McCoy trails.

So, which one is better?

The trails and terrain in Ontario are different than what you’ll find in West Virginia, but they’re right up there with the amount of fun and adventure you can have. If you’ve never experienced the trails that Ontario has to offer, you need to get out there and check that off your bucket list. You'll quickly discover the wealth of great trails and see why Ontario is one of the best ATV destinations in North America.

Contact the OFATV for more information about trails and riding in Ontario.

Dave Baker An avid outdoors enthusiast, Dave is active in hunting, fishing, trapping and ATVing. He has been involved with the Nation Valley ATV Club since its inception, and is a past president of the Ontario Federations of ATV Clubs.