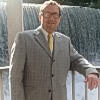 Thomas, a graduate of the University of Guelph, was born and raised in Sault Ste. Marie and is active in the local theatre community as a producer and in soccer community as a player and coach.  Thomas is a Supervisor at Shaw and is currently the Business Manager for The Musical Comedy Guild of Sault Ste. Marie. He has been the Vice-President on the Board of Directors of The Sault Symphony Association and Past President of the Kiwanis Club of Lakeshore.  He attended St. Mary's College where he was actively involved with sports, Student Council and Theatre SMC.  He assisted with props in their production of Flowers for Algernon and did lights for West Side Story in the early 90`s.  Most recently, Thomas was Producer for Theatre SMC's Quonta award winning Rosencrantz and Guildenstern are Dead in 2008 which went on to win numerous awards at Theatre Ontario.  In 2009 Thomas was Producer for Theatre SMC's The Diviners which won multiple awards at Quonta, was Producer for Theatre SMC's first ever children's play Charlotte's Web (2010), Little Sister (2011), Our Town (2012) and Schoolhouse (2013). He was Producer for the Sault Symphony's production of The Sound of Music in 2009 which also was Thomas' on-stage debut and Producer of White Christmas (2010). In 2011 he joined The Musical Comedy Guild and was Producer for Annie later that year. Thomas was Co-Chair for Theatre Ontario 2012, a festival celebrating the best in community theatre in Sault Ste. Marie.  2014 marks Theatre SMC`s 25th Anniversary and Thomas will chair a committee celebrating the success and accomplishments of the progressive theatre company and its actors since its inception in 1989.