Lake Superior—its vistas, rugged shoreline, and islands—are worth the trip. 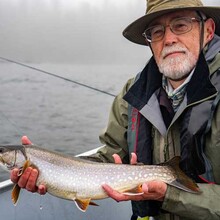 To me, fishing as a young boy was catching brook trout in the small streams around Kitchener, Ontario. I was always excited to catch brook trout in thin water creeks and I thought of these fish as a bejewelled blessing from the fish gods. That feeling of awe and wonder has never left me. Ever since I can remember I heard stories about the amazing large brook trout that once cruised the shoreline of Lake Superior, capturing the name of Coaster due to their movements along the lake’s shorelines. I was also aware early in my career as a government biologist that their numbers had plummeted compared to many decades ago. However, in recent years, with the fine work of an MNR biologist, Rob Swainson, local anglers and the communities of Nipigon and Red Rock, they were purported to be coming back.

The Best of Brook Trout Fishing in Ontario

I often wished over the last number of years that I would have a chance to fish for them. I had that chance and privilege this past May when I headed up to Bowman Island Lodge with Mark Melnyk to fish for Coaster brook trout and to find out about their return.

In the 1880s, the Nipigon River and the shoreline of Lake Superior were considered the greatest trout fisheries in North America attracting anglers from all over North America and Europe. Due to overfishing, the brook trout fishery collapsed by the early 1900s slowly began to recover and then was knocked back down by the building of railways, highways, and power dams. By the 1960s they were a thing of the past except for a remnant population still surviving in the Nipigon River and Bay. However, starting in the late 1980s, major actions by government biologists working with local communities and anglers began to rebuild the population of this amazing fish. By the early 2000s, I heard rumours that these fish were beginning to come back. Prior to my trip, I spoke with friends that live along the North Shore of Superior who indicated that for the first time in living memory, they were starting to catch coasters again. I had to see for myself.

Mark and I were guests of Gary and Leanne Lange, the builders and owners of Bowman Island Lodge. The lodge is situated on Bowman Island, one of the last outer islands beyond Nipigon Bay at the very edge of the Big Lake itself. The lodge is an hour boat ride from the dock at the village of Nipigon. Gary runs the lodge, as well as provides cruises of the Lake Superior shoreline.

Bowman Island Lodge is a three-season accommodation, providing a comfortable base for fishing and exploring the shoreline and islands off Nipigon Bay. The lodge is on the north side of Bowman Island and so the water offshore is protected from the strongest seas of the big lake. The main lodge includes the kitchen, a lovely comfortable lounge, and a dining area. There are three bedrooms with bunk or double beds, providing room for up to 9 guests in the main lodge. Additionally, there are other cabins available that can sleep up to four people, as well as a cabin that has a sauna and shower. The electricity for the lodge comes from solar power while cooking is done with a large propane stove or the lodge's barbecue. All in all, it is a very comfortable and homey location from which to fish.

Since the fishing was great within sight of the lodge, we were able to come back to the lodge for all our meals. We found the meals at the lodge delicious. and the company of Gary and his wife Leanne wonderful. As well as angling, guests can local hiking trails, and a number of sites allow you to explore the history of the area. Much of the fishing for coasters and lake trout can be done within sight of the lodge, so there is no need for packed lunches, simply return to the lodge for a great lunch.

At this time of year, the fish are close to rocky shorelines, shoals, points, and drop-offs. This is where Gary suggested we focus our efforts, and we were not disappointed. Casting along the shoreline we caught coasters averaging 17 to 19 inches with a few over 21 inches. We also caught a few lake trout that move into shallow shoals at this time of year. Coaster fishing is great right into July and then again into the Fall. Lake trout move into the nearshore shoals from Late May till the end of June.

I fished an Orvis Helios 6 weight rod with a floating line with a high-density sink tip. Mark used an Orvis Helios 8 weight rod with an intermediate line to sink his flies. I found that a sculpin imitation worked best for me and as a matter of fact, I caught at least ten coasters on the same fly before changing to a fresh fly. Mark used a brown woolly bugger and smelt imitation for his Coasters, as well as a large blue and white streamer for his Lake Trout.

The fishing exceeded my expectations. Coasters are hard-fighting fish that can range in colour from silvery to the traditional majestic colouration of stream-dwelling brook trout. This level of success was not always the case. Gary Lange mentioned to us that about twenty or so years ago, within a weekend of fishing, you might catch 2 to 3 brook trout in the lake, with most rarely over 12 inches. Now, in three days of fishing, we hooked and landed 27 Coasters ranging in size from 12 inches to 23 inches with an average size of about 19 inches. This does not include the three lake trout caught by Mark or the 7-pound plus rainbow caught by our camera guy Ryan (and his 22-inch Coaster!). This is truly amazing fishing. In speaking to a friend and excellent angler who lives in Terrace Bay, it has only been in the last 10 to 15 years that locals are once more catching coasters near the town. The population is continuing to grow and expand.

This is an ongoing success story, but it is not over yet. I hope that we as a community of anglers continue to work towards bringing these magnificent fish back Jack G. Imhof Mostly retired since 2017 as the National  Biologist and Director of Conservation Ecology for Trout Unlimited Canada (TUC), Jack has spent over 48 years of his life working on river and watershed restoration, specializing in restoration ecology, watershed science and management and natural channel design. Jack is an active fly fisher and fly tier for over 50 years and has fished across Canada and the USA as well as England, Australia and Argentina. Over the years he has given close to 20 presentations at the Canadian Fly Fishing Forum. He is also a 5th dan in Yoshinkan Aikido.