Boot camp attendees wake to a misty morning on the French River, to continue the learning both in-class and on the water. 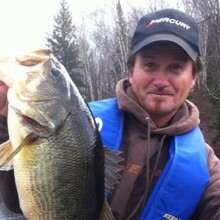 By Pete Bowman
Pete is host of the Fish'n Canada television show.

On part one of this two-part Fish’n Canada Show, we hosted the first-ever “Fish’n Boot Camp” at Chaudière Lodge on the French River. On day two, our recruits awoke to a classic misty morning on the French River. It’s a perfect time to wait for the fog to lift, and take advantage of the downtime with more in-class sessions like baitcasting vs. spinning reels.

“One of Ang’s favourite components of teaching someone the next step in fishing,” says Pete, “is taking on the dreaded bait caster. This boot camp is the perfect arena for such a clinic”!

And with that, Angelo gathered a group of enthusiastic anglers and proceeded to give them a very intense (for the morning shift at least) outdoor clinic on the backlash machine.

As the fog finally lifted the last of the boot-campers headed out for another day on the water. The fog and dark clouds have given way to sunshine and rainbows. During this outing, Angelo had taken out our MC for this event, SportsNet 590’s own Dan Gibbons, for a shoreline bass clinic. Ang wanted to see what Gibby had learned that week. They’ve worked together for years, trying to get Gibby to follow through on both his technique, but also his persistence. In fishing, as with most skills, practice can result in perfect.

Well, this outing must have worked. With minimal tutoring, Gibby set into a gorgeous French River Largemouth which he dedicated to Mr. Viola himself.

On another boat, Chaudiere Lodge guide Marcel (who specializes in Muskie) had a group of guests out for a long day stalking the legendary fish of a thousand casts. On this outing though, they were trolling which is a much easier way of Muskie fishing with a group of people.

The result: a fantastic French River Muskie that the boys hooted and hollered about, and brought back great stories for the rest of the campers to hear.

While all this was going on, Angelo had now dropped off Gibby and picked up Roland Martin and Roy Armes, as they made the rounds checking out what other boot campers were up to.

At one point they came upon a group being guided by Steve Niedzwiecki and to the group of anglers' luck, Roland started giving them advice…something that very few on this earth have experienced.

“I hope these guys realize the magnitude of having Roland Martin giving them on-the-water coaching,” said Ang “heck even Pete and I are waiting for that one!”
Roland Martin is an incredible man. Even when he’s relaxing…he’s “on.”

Ang and Pete even did a bit of seminar work in the elusive Muskie… of course, it didn’t hurt when a guide like Marcel at Chaudiere took the students out!

While all this was going on, Pete had yet another group out and was giving them tips on working shallow Largemouth.

“Although the guys started out throwing all kinds of baits, I gradually had them pretty much all move to some kind of Senko. One of my guys' (Wayne Sandford) previous fishing experiences was catching a single Mackerel… that’s it! I like guys like this since they are 100% open to suggestions and are eager to learn. I set Wayne up with a 4” black Yamamoto Swim Senko and gave him my thoughts as to how to work it. Lo and behold, he proceeded to haul in Largemouth after Largemouth.”

Not to be outdone, the rest of Pete’s group quickly gravitated to Senkos.
Pete says “Teaching people to fish is rewarding on its own, but watching them succeed…man, that’s as good as it gets.”

It was looking like everyone was having some form of success and all were having a fantastic time at Bootcamp… and that was our intention.

Later that evening Angelo got the word from a good friend and local musky expert Pat Tryon who happens to be here vacationing at the same time as a boot camp that he saw a giant musky holding on a shoal not far from camp and could be catchable in the following few hours.

“I had already decided,” says Ang, “to take two of the students from the baitcasting workshop out on the water that night to see what they had learned. This would be the perfect stage to show off their newfound skills.”

Angelo took the time to wrangle up two willing boot campers and get them out for a late evening Muskie session…a once in a lifetime experience.

We set these guys up with 8′ Carrot Styx and big in-line bucktails. This kind of gear isn’t the easiest to use but, along with Ang’s on-boat mentoring, our boys should fare out very well presenting the baits…it was up to them and the Muskie gods to see if they connected!

“As we prep to catch this last sliver of daylight,” Angelo states “the excitement level for this big-fish adventure had just hit extreme. Anything could happen… what a bonus it would have been if those boys encountered Muskie Magic on that night!”

“Just knowing we’re about to enter the realm of a giant fish,” continues Ang, “was making me a little bit nervous. I had two totally green big-game fishermen, we were on a time-clock with dwindling daylight, and a 50-plus-inch water wolf was lurking under the surface waiting to annihilate something, anything. Things could have gone really bad, really quick. I don’t mind telling you this felt very surreal, and we hadn’t even made our first cast!”

Not only were Ang’s newly found Muskie team challenged with firing giant baits on big stiff sticks for the first time, but they were also doing it in fast-fading light. Casting bait-casters is scary enough on its own, but under those conditions…it can become a real monster in a big hurry!

A little live music after a day of fishing never hurt anyone.

“Well, unfortunately, the boys didn’t catch that giant French River Musky of a lifetime,” says Pete, “but it’s safe to say, they all brought back a lifetime of memories”.
“They call the Musky the fish of 10,000 casts,” says Ang; “now Mike and Doug know why. But I’ve gotta hand it to both of them: if I was heading into battle, these are the kind of soldiers I’d want next to me. They were so focused on mastering the Baitcaster challenge that connecting with a fish might have distracted them from their goal. The boys passed with honours!”

All in all, the boot camp was an overwhelming success. Team Fish’n Canada succeeded in teaching the troops a thing or two, team Chaudiere kept us fed and well rested, team Cooper Tire brought in all the right people and team Tire Discounter went away with a lifetime of great memories. Pete Bowman Pete attributes the beginning of his ﬁshing success back to ﬁshing as a kid. His dad would plan a ﬁshing trip and Pete would always be included. Between those trips and his summer vacations (which always included ﬁshing) with his family to northern Ontario, Pete’s ﬁshing path was created. As a teenager he was consumed with the BassMasters® tournament events and pros. Pete bought his ﬁrst bass boat in his early twenties and jumped right into tournament ﬁshing. In the mid-80s he hooked up with The Fish’n Canada Television Show on a part time pro staff basis and is now proud to be a full-time part of the #1 viewed outdoor television program in the country.