How to Get Into Fishing

You haven't gone fishing in years, how in the world would you get started? Hook Your Kids on Fishing

Create memories with your children that last a lifetime. A Beginner's Guide to Ice Fishing in Canada

(With a few tips for the seasoned fishermen too!) It's not just a guy thing! In Pursuit of Walleye on Lake Ontario 5 Reasons Why Fishing With Family Rocks The Next Generation of Fishing When was the last time you and your family took part in one of Canada’s traditional pastimes? 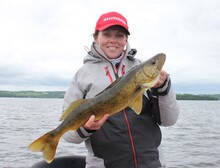 By Yvonne Brown
Yvonne is the founder of Ontario Women Anglers and the Fishing 101 for Women program.

It used to be that a father would take a son fishing, and that's how the activity was handed down from generation to generation—but times have changed. Fishing can be a great family vacation—and us moms should be leading the charge in bringing the family back to this important tradition. Some of us already are. Because where Mom goes, children naturally follow.

Such is the philosophy shared by Mike and Jaana Brazeau, owners of Horwood Lake Lodge, near Timmins, Ontario. The Brazeaus are seeing more families out on the water, with fishing rods in hand, making memories to last a lifetime.

Fishing can be enjoyed by people of all ages and backgrounds, and the benefits are many: improved patience, communication, and mental health; better understanding and appreciation of our natural resources, and increased self-esteem. It encourages problem-solving and gives families an opportunity to unplug and have fun.

Horwood Lake Lodge offers many amenities geared towards the comfort and enjoyment of families. Pontoon boats provide a safe and spacious setting for parents and children to spend time on the water together, whether it’s for a few hours of fishing or a sight-seeing trip around the lake to search for eagles or the famous white moose.

The lodge also offers activities such as ATVing, hunting, kayaking, and hiking if your kids don't have the attention span for solely fishing. Trophy-sized northern pike and walleye are the pride of this remote lake, which also offers smallmouth bass and perch. Mike and Jaana actively promote catch-and-release to their patrons and encourage anglers to return larger fish to the lake to help sustain the population for future generations.

“Smaller fish are in abundance and if you’re not catching 100 walleye in a day, then you’ve forgotten to put a hook on your line,” jokes Mike. “It’s such a healthy lake, you don’t need to be experienced. All you need to do is put a minnow on a hook and you’re gonna catch fish.”

And if you’re looking for unique accommodations, the resort offers tipi “glamping” as well as fully-equipped, traditional cabins. These luxurious tipis are roomy enough for three to four people and provide the outdoor experience without the limitations of tent camping. An additional campfire tipi offers the enjoyment of the open fire and protection from the elements.

There is no charge for children six and under, and kids 7 to 14 are half price, making a trip to Horwood Lodge an affordable summer vacation. Packages can include accommodation, meals, and a boat and motor which can be upgraded to a pontoon for a nominal charge. For those new to fishing, National Fishing Week offers an opportunity to fish licence-free from June 30 to July 8 in 2018. Canadian citizens ages 18 to 64 can fish without a licence during those nine days, which gives parents the perfect opportunity to introduce the young ones to the pastime without the added cost of a licence.

Steve Gurgacz has been visiting Horwood Lake Lodge since 1973 and, 44 years later, still goes there for the great scenery and incredible fishing. He has experienced pike and walleye fishing at its best and has seen a number of moose, bear, and bald eagles. Over the years, he has witnessed more women and children at the resort fishing, relaxing, and enjoying “a true Northern outdoor escape with all the comforts of home.”

Steve attests that Mike and his crew make visitors feel like they are part of the family and are attentive to everyone’s needs. Improved accessibility and upgrades to the facilities keep people coming back and make for a more comfortable stay. Gurgacz describes his start and end of days at Horwood with excitement: “wake at 6 am, stand on the dock, look, and listen! Stand on that same dock at midnight and see the Northern Lights dancing!”

Sometimes, a family fishing trip can set off a lifetime passion. Scottie Martin of the Canadian Fishing Network recalls a definitive moment with his late father on a small lake in Northern Ontario. At the age of six, armed with only a hook and bobber, he caught what he thought was just another rock bass. “Don’t lose that. It’s a pickerel!” his dad suddenly yelled out and, through that outing, Martin was on his way to adopting his father’s passion for fishing. Years later, he would create the Adopt-a-Walleye program, which helped to supplement the Ministry of Natural Resources and Forestry’s stocking program for seven years. He has filmed 105 episodes of Walleye Wednesday, which promotes catch-and-release of the species’ broodstock, and created the Canadian Fishing Network, a platform that showcases Canadian anglers and fishing throughout the country. All this from just one childhood experience with his father. “I always wonder what would have happened had I lost that fish,” laughs Martin.

Ontario Women Anglers (OWA) is an organization with a mandate to get more women and children outdoors and on the water. Through anglers’ education workshops, hands-on activities, fishing excursions, community events, and mentorship, OWA provides opportunities for both new and experienced female anglers to increase their fishing skills and to network with others that share this passion. And by the way, OWA is organizing a ladies' fishing trip to Horwood Lodge this August. Contact us if you're interested in finding out more! Yvonne Brown Best known as the founder of Ontario Women Anglers and the Fishing 101 for Women program, Yvonne is a strong advocate for getting women and children outdoors and on the water. She is the first female to receive the Rick Amsbury Award of Excellence.