This Lake Nipissing lodge is a perfect base for a memorable fishing trip with family or friends. 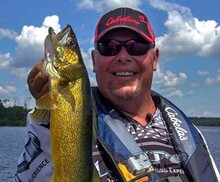 By Ron James
Ron is one of the hosts of Fish TV and has been fishing for over 30 years.

Lake Nipissing is the fifth largest lake in Ontario, and is relatively shallow for its size, with an average depth of 15 feet (4.5 meters). These shallow waters make for many areas of extensive weed flats especially in the bays located off of the main lake. Some areas, such as West Bay, are very shallow with many rock shoals and small islands separating the weed beds. The deeper areas of the lake are found at the mouth of the French River 210 feet (64 meters) and the channels of the West Arm 295 feet (90 meters).

Fish habitat and fish abound in Nipissing. The main sport fish include musky, northern pike, walleye and bass. Originally the Lake Nipissing walleyes were all the smaller “blue” walleye. In the early 1920’s Ontario’s Lands and Forest introduced millions of “yellow” walleye fry into Nipissing. These new, larger walleye soon dominated the walleye population in Nipissing, a testament to the influence that fish stocking can have on a body of water.

On this trip, the FISH TV crew focused on largemouth bass, but let’s start out by talking about how beautiful Lakair Lodge is with its remarkable Barbless Hook Restaurant overlooking the West Arm—right between West Arm and Lake Nipissing. The food is fantastic and they also offer takeout if you have a cottage or live in the area.

The cottages at Lakair Lodge have all been renovated with modern appliances, comfortable beds and kitchens in case you just want to cook your own dinner after a day of fishing.

After we arrived and got all settled in, we jumped right in the Lund and headed out fishing. We came out of the lodge and headed to Lake Nipissing looking for some long wide creeks that are full of weeds and lily pads. When venturing out into Lake Nipissing, you want to stay in the channel and when you veer off and head for these creeks you would be well advised to have a Garmin Livescope with up to date maps on it because there are many rocks and boulders. We took our time going back into these creeks and we were so glad we did as the fishing was outstanding! The thing about these largemouth is that there is no pressure on them whatsoever because the walleye, smallmouth and musky fishing is so good! You will have all these fish to yourself as the largemouth are harder to navigate and I am okay with that.

First thing we noticed was that the weeds were up as we made our way back to the pads, and that is a great sign. Leo and I had top water frog fishing on the brain and that’s what we did, using a 13Fishing Trash Panda frog. The largemouth were under the pads and blasting through them wanting to eat that frog. There is nothing better than watching giant bass busting through pads with an explosion smashing your frog! We found that the bigger bass were really close to the bank in less than a foot of water. What I think was happening is that the bass were pushing sunfish, bluegills and other baitfish against the shore and trapping them for an easy meal, so when a frog was near the shore, the bass could not resist.

We hit the first creek and landed over 30 bass on top water all between two and five pounds. After we worked over that creek, we looked on our Garmin map and made our way to the next creek. That creek was a little bigger and had some current moving in it so we hit the jackpot! Whenever you see that, you better get ready to catch some big fish. Leo made the first cast right to the bank as we caught most of our fish on the bank in the first channel so we thought for sure there would be a pattern. But, to our amazement, a four pounder hit half way back in the pad bed. I think with more current, the fish moved off the bank to feed as they had weeds and pads to hide behind to ambush bait. What I did notice was the average fish that we were catching were bigger as well. Making our way down one side of the creek and up the other, we didn’t catch as many as the first channel but the fish were bigger on average. Maybe because that creek was larger than the first, maybe the current, or just that there were more bait present, but I really didn’t care because it was an unbelievable top water day!

So the next time you are looking for a vacation with the family or a fishing trip with the guys and girls, take a good long look at Lakair Lodge, you will not be disappointed!

Ron James Ron has been fishing for over 35 years. He started fishing when he was just a youngster with his father Bill James (God rest his soul). He moved onto tournament fishing as his passion grew. With numerous wins and top finishes, the next step had to be taken. He met Leo, and the unstoppable force of Fish TV "is the best thing that has happened.