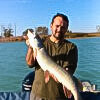 By Dale Hainer
Dale Hainer is a professional outdoor writer, photographer and videographer.

The harbour lights of Kincardine dance dimly in the wake as we motor into the pre-dawn blackness of Lake Huron. I'm aboard Dwindle's Dream Fishing Charters, and the darkness only adds to the mystery of what lies ahead.

The Whalesback Channel of Lake Huron: A Fishing Trip for the Bucket List

Captain Rick Dwinnell likes an early start. "Huron's Kings like to feed in low light," he states from the flybridge wheel, "with such clear waters, these fish are easily spooked." Rick has been plying these waters for nearly three decades and knows them well. On the deck below, assisted by cabin lights, son Chris Dwinnell is busy selecting an array of brightly-coloured spoons. When we reach his treasured hot spot, Rick throttles back. Lake Huron's chinook salmon fishery is no mistake. The Lake Huron Fishing Club has been voluntarily maintaining and managing hatcheries in Port Elgin and Kincardine for decades. The annual stocking of 110,000 chinook in this area keeps the vibrant, micro-fishery alive.

When the sun peaks above the horizon, Huron's plentiful lake trout come alive. "The lakers are more common in these parts now," says Rick, "they are native to the area and the MNRF has been stocking them in large numbers."

With these words spoken, rods dance to life and we reel in a rainbow trout, a coho salmon and a lake trout simultaneously. "Well, prove me wrong," chuckles Dwinnell, "we do stock a lot of rainbow in this area, with assistance from the Ontario Steelheaders." Central Lake Huron has a high number of rainbow trout spawning in local rivers, including an estimated 40,000 in the Saugeen. "And the coho has really favoured the area this summer," says Dwinnell, adding that "pink salmon are also on the timetable this year." Pink salmon accidentally introduced decades ago along the north shore of Huron and make their presence known every four years. Another addition is Atlantic salmon, stocked in north Huron by the Michigan DNR. "We catch several Atlantics a season now," says Dwinnell, "they also seem to favour the Canadian waters off Kincardine."

By morning's end, we have a brace of lake and rainbow trout, coho salmon and one large chinook. Add to that the potential for pink and Atlantic salmon, and the increasing presence of walleye, and the Lake Huron fishery remains as intriguing as it was in the predawn darkness.

Dale Hainer , born 1960 into a family of hunters, anglers, trappers and farmers, pursued a career with the Ontario Fire Service at age 19. Throughout his life, he maintained his roots to the land and shared his tales while being a professional outdoor writer, photographer and videographer. Retired at age 50 from the Service, he now spends countless hours creating more adventures to share with you. Member of the Outdoor Writers of Canada.