Take Your Sled in Pursuit of Big Fish 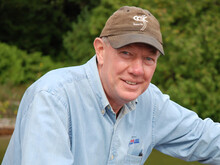 George Offshack is a long-time snowmobiling and boating enthusiast.

While for some using a snowmobile for winter recreation means a spirited ride across thousands of kilometres of Ontario trails, for others it means using their sled to reach prime fishing grounds. The secret spot on your favourite lake (that might not be where the fish are in the summer), may produce trophy-sized Lakers, northerns, or whatever your favourite quarry is through the ice. Add to that the ease of toting in your gear by snowmobile, and it's a perfect combination -- catch a few fish, enjoy some gorgeous winter scenery, and share the camaraderie of friends (and your favourite fishing dog!) With several holes drilled over a known weed bed, in about 15 feet of water, Tim, a cottager on the lake, and his friend Dan were scoring on the yellow perch while being interviewed for this article. The trout did not appear right at that time, but they said that they'd been hitting quite well both the previous weekend, as well as just the day before. Their gear consisted of a gas-powered auger, several standard short-length ice-fishing poles, and a bucket of minnows. They had a high-tech “pop up” ice hut made of a space-aged material in black that absorbed whatever solar heating was available, and made for a comfortable day out on the lake -- simple, but effective. About a kilometre to the northwest sat a well-built, traditional, wooden-sheathed ice hut. It had been pulled into place by a Ski-Doo Touring LE sled earlier in the day. Inside, father and son fishermen, Paul and Ryan, were also enjoying success with the yellow perch. However, in their hunt for big lakers, they had all the latest high-tech gear. An underwater camera and a digital recording fish finder were probing for fish down one hole, while the guys (and their rambunctious dog named Odie) fished down another hole just a few feet away. They were sitting on a spot where a rock pile in six to eight feet of water suddenly drops off to around 15 feet, hoping to find the trout suspended there. Ice fishing is a great way to get off the couch and enjoy a bit of winter. Many resorts in Ontario, such as Limerick Lake Lodge on Limerick Lake, are open to providing accommodations, meals and even equipment, for those venturing out to try their luck.

The vast majority of Fisheries Management Zone 15 is within the boundaries of Ontario’s Highlands Tourism Organization and boasts the closest ice-fishing for lake trout to both the GTA and the metropolitan Ottawa area.

If your ice fishing adventure lies outside of Zone 15, check the regulations to see which species are available to take. Northerns, walleye and yellow perch are favourite targets in neighbouring zones 17 and 18.

George Offshack is a long-time snowmobiling and boating enthusiast, as well as owner and operator of the Limerick Lake Lodge in Gilmour, Ontario.