Experience fishing for Salmon in the legendary St. Marys Rapids that join Lake Superior and Lake Huron. A guide will provide tips and the gear you need to ensure a memorable fishing adventure. Choose from fly-fishing in the rapids or a guided boat fishing trip on the St. Mary's River. Includes top notch accommodations.
Packages:
From $454
BOOK NOW

The expanse of Lake Superior in Northeastern Ontario's Michipicoten Bay is one of the best salmon fishing destinations on the Great Lakes. 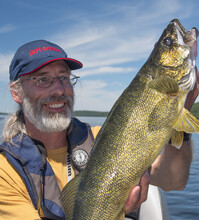 By James Smedley
James Smedley is a photographer and writer with over 400 articles and 1,000 images in U.S. and Canadian books, magazines and newspapers.

With the expanse of Lake Superior to one side and the long sand beaches and rounded headlands of Michipicoten Bay to the other, Tarmo Poldma and I are probing the depths with downriggers set for salmon.

I haven’t fished the bay for years, but a familiar feeling of awe comes over me after launching into the Michipicoten River and making our way down the powerful flow to its junction with Lake Superior. Even when the fish aren’t biting, simply being on the Big Lake is an uplifting experience. But after Tarmo and I dip the net under four salmon and a couple of lake trout, the majesty of Lake Superior is amplified loud and clear.

Back in the Day

Other anglers on the bay caught fish too. In fact, five-fish limits averaging 20 pounds each seemed to be the norm. This was also the time of the inception and rapid growth of the Wawa salmon Derby.  Gary Sittler, owner of Sit’s Place Restaurant and Brad Buck of Buck’s Marina, organized the premier event which attracted 22 teams. The derby grew quickly, regularly drawing over 300 teams per year through the late 1980s and early 90s. Buck, president of Wawa salmon Derby Incorporated, says the fishing for pink, coho, and chinook salmon remains strong and, as the event nears its 35th anniversary, regularly attracts more than 150 anglers.

Some years later,  after moving to Wawa from Sault Ste. Marie, I decided to try fishing Michipicoten Bay with my friend Neil Simpson. Although word on the street said the salmon fishing had declined, we were dealt a sunny and calm morning that yielded four salmon between 16 and 22 pounds. We ran the standard dodger and fly combination on one rod and a dodger and cut herring plug on the other through depths varying between 40 and 120 feet.

Today we are doing the same and again the action is better than expected. With a full-service marina and a wide range of accommodations in nearby Wawa Michipicoten Bay remains one of the best salmon fishing destinations on the Great Lakes.