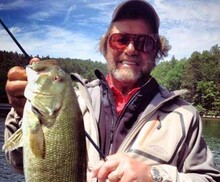 By Babe Winkelman
Babe is the host of “Good Fishing” and “Outdoor Secrets.”

One of the great joys of my life as a fisherman has always been exploring new waters for the various fish species I dearly love. Ontario has always been at the top of my list of places to search because it offers endless, pristine, unpressured waters, an abundance of gamefish, and first-rate lodges to accommodate my needs while up there.

Last May, when my wife and I were looking for a special place to go smallmouth bass fishing, I was finally able to check off a lake system and Ontario lodge that’s been on my bucket list to visit for a long time. Upon our arrival at Fireside Lodge, which is located near Sioux Lookout on the shores of famous Little Vermillion, we discovered an amazing lodge and the ultimate in Ontario adventure accommodations. Jumping ahead a little to our final conclusion of this operation, throughout our stay at Fireside Lodge, everything was first-rate.

When it comes to smallmouth bass, which are one of our favorite fish to catch, the Little Vermillion lake system has a reputation for producing some really big fish—many smallies in that three- to four-pound range, with four- and five-pound fish catches being fairly common. Now if that’s not enough to lure smallmouth lovers like us up there, I don’t know what would be. Of course, I brought my camera crew, so the complete story of our time at Fireside will become an upcoming episode of Good Fishing.

Anyway, we actually made two trips to Fireside Lodge this year—the first in May hoping to get into big fish on beds. To a degree, we did, but due to uncooperative weather that offered us very little time on the water, to another, we did not. Ultimately, we called the trip, vowing to come back in June, which we did. But before I get into any of our experiences from that trip, I do want to mention the fact that I did catch a large, quite rare lake trout and two walleyes from the waters of Little Vermillion on that first trip. There’s a strict moratorium on lake trout fishing on this particular body of water, so after landing a beautiful 17-pounder or so that was incidentally caught while fishing for smallmouths, she was promptly released unharmed. Although their momentum is gaining, walleyes are fairly rare from this fishery too, so catching a few was nice to see as well.

When we returned to Fireside in June, we were greeted with fantastic stable weather and everything else we love about the Ontario experience.

Very quickly, Kris and I set out from the dock excited to explore. At this time of the year, with spawning long since completed, I began searching out strategic spots along shoreline breaks and main lake reefs—points and inside turns. We each threw tube jigs in assorted colors and slowly worked them down the drop-off as I moved along quite slowly with the boat. This isn’t the fastest presentation I could have selected for this time of year, but I’ve always found it a very thorough way to fish key spots with a bait that smallmouth can’t seem to resist when presented according to their feeding mood. And to be perfectly honest, because of that direct, instant connection you have when setting the hook on a bite, jig fishing has always been my favorite way to fish for hard-fighting Ontario bronzebacks.

Now of course I could go on and on about every detail of the success we found, as well as all the things we did pattern-wise to make it happen, but I’ll leave most of that for you all to see in our upcoming show at Fireside Lodge. What I will say now to summarize is that indeed we did find a smallmouth paradise at Little Vermillion. We caught and released dozens of beautiful smallmouths with a larger than average size commonly found in other Canadian lakes.  No, we didn’t get into the giants on this trip, but with a lake record of over 24 inches, you know I’ll be back to explore this gorgeous Ontario lake chain again.

There was one other very huge incidental catch that is a testament to the pike fishing available at Fireside Lodge. As was the case with the trophy lake trout during our first trip, while fishing for smallmouth I was able to land a huge gator on only 8-pound line, which almost even frightened me. See and judge for yourself, but at 50 inches, that pike went well over 30 pounds according to catch and release charts. This pike was absolutely fat as a pig, without a blemish on her. Everyone present agreed that she was one of the prettiest, most perfect representations of a monster pike that any of us had ever seen!

So, all in all, I now completely understand this system’s potential, we did discover a perfect traditional old-time lodge that treats everyone like family and that’s all we ever need to know to keep us coming back.

Kris and I both give Fireside Lodge and all the friendly people there, an A+ rating across the board. Without question, we strongly recommend the whole experience they offer to anyone looking for a new spot to check out in the beautiful province of Ontario. Simply get a hold of owners and host Alan and Audrey Brandys at 1-800-545-0815 or find all the information you’ll need at http://firesidelodge.com.

Babe Winkelman As the host of Good Fishing and Outdoor Secrets, Babe has succeeded in fulfilling his dream of being self-employed in the outdoors industry through a combination of hard work, good business instincts, and a gift for communicating his love of hunting and fishing. Babe was inducted into the prestigious Sports Legends Hall of Fame. Babe is the only outdoors figure to be so honored before or since. He was inducted into the Fresh Water Fishing Hall of Fame in 1988, and the Minnesota Fishing Hall of Fame in 2001. In 2007 he earned the “Excellence In Craft” award from the Outdoor Writers Association of America.