Rainy Lake in Sunset Country truly is a fish factory

"For me, half the fun in bass fishing with topwater baits is the anticipation of the strike." 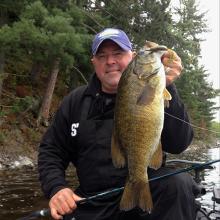 Some lakes in Northern Ontario are just created by nature to become fish factories. You know the ones I am talking about. Countless spawning bays for excellent reproduction, hundreds of islands with tapering points, sand, gravel, rocks, offshore shoals, and reef and weed beds scattered in between for good measure. These all-natural locations attract and hold game fish at all times of the day.

One such lake that is popular with bassaholics (including yours truly) is Rainy Lake in Ontario's Sunset Country. Rainy Lake has a surface area of three hundred and sixty square miles that straddles the border between the United States and Canada. The Rainy River issues from the west side of the lake and is harnessed to make hydroelectricity for U.S. and Canadian locations. International Falls and Ranier, Minnesota are situated opposite Fort Frances Ontario, on either side of the Rainy River. Rainy Lake and Rainy River establish part of the boundary between the U.S. state of Minnesota and Ontario.

This lake has bass, lots of bass.

Rainy Lake is popular for recreational fishing of species such as walleye, northern pike, muskellunge, crappie, largemouth, and smallmouth bass, which are all considered excellent freshwater game fish. Rainy Lake is home to the annual Canadian Bass Championship, which has been held every summer since 1996. The lake is dotted with many small islands on both the Canadian and American sides; numerous fishing cabins, small fishing resorts, and vacation homes have been built on these islands.

Our trip included a visit to Camp Narrows Lodge with old friends Tom Pearson (who owns the lodge) and main guide Scott Hamilton, who both know Rainy Lake inside out and spent their entire lives fishing this “bass factory”.

Camp Narrows Lodge offers you the opportunity to experience a unique outdoor fishing and hunting adventure at a boat-in resort. Guests enjoy an unbeatable combination of first-rate accommodations and excellent smallmouth bass, walleye, crappie, and northern pike fishing. The lodge is strategically situated on Northwest Bay, right in the middle of the north arm, which is world-famous for its unbeatable smallmouth bass fishing. The lodge catch-and-release policy on these bronzebacks ensures Rainy Lake’s north arm will continue to have a world-class bass fishery.

On Rainy Lake, you will find yourself surrounded by acres and acres of unspoiled wilderness. Camp Narrows is more than just a sport fisherman’s paradise. The lodge offers fall black bear and duck hunting, as well as whitetail deer hunts. If you are looking for the ideal spot for a family vacation, this camp is the place for you. Many fishermen return year after year to relax and enjoy a landscape virtually untouched by modern man, while comfortable at home in one of the deluxe modern cabins. To ensure that they meet your holiday needs, they offer everything from basic Housekeeping Plans to fully catered American Plans or even corporate packages.

We started our first day of fishing with Scott in search of some post-spawn bass along shoreline breaks in between six to ten feet of water with noisy topwater baits such as the YoZuri 3BD prop bait and poppers which stirred up a few decent bass in the two-pound range, but we wanted some of the Rainy Lake big fat smallmouth that call this lake home so we kept changing locations. As we changed locations, one thing remained consistent and that was the unbelievably perfect natural structure elements as mentioned earlier.

For me, half the fun in bass fishing with topwater baits is the anticipation of the strike.

Cast, let the bait settle, then make some subtle twitches of the rod tip and wham, water explosion, and the battle begins, man vs bass. Scott and I spent the rest of the day fishing some of his ‘honey holes’ and we both got a severe case of ‘bass rash’ on our thumbs from catching and releasing so many beautiful Rainy Lake bass. For variety’s sake, Scott suggested we tie on some suspending jerk baits and fish some of the sharp dropping island points for potentially bigger bass and maybe some trophy walleye that inhabit the same locations on Rainy lake. He was a dead one! The third spot we fished Scott hooked up with a gorgeous twenty-six plus inch walleye on his jerkbait, not twenty feet from shore, which was safely netted and released and on the very next cast to the same rock point, yours truly hooked up with a twin of Scott’s fish in the twenty-four to twenty-five-inch class, which we took a few pictures and released the trophy walleye in the same spot as caught.

Rainy Lake truly is a fish factory and not just for bass! The big thick walleyes, slab-sized crappies, and gator-like Northern Pike make this location a very popular destination amongst North American vacationers every year. Think about Rainy Lake and Camp Narrows Lodge when making plans for your next angling vacation.

Karl Kalonka It's possible Karl's love for fishing began as early as the age of five. His parents took the kids on weekend trips across Ontario fishing for panfish, catfish, and bass. "I started with a bobber and worm from the time I was five years old," says Karl. These days, he has the enviable task of doing what he loves for a living, travelling across Ontario fishing, filming and producing two outdoor series, Extreme Angler and Crappie Angler TV.