Ever wish you could combine your favourite pastime with your canine companion? We've got the complete guide right here. 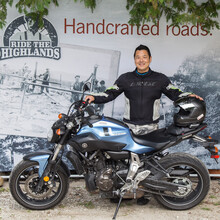 Man’s and woman’s best friend. Who wouldn’t want to share their favourite pastime with their bestie? Just because they have four legs, bad breath, and no opposable thumbs doesn’t mean they can’t come along for the fun. Plus, for them riding a motorcycle is way better than just sticking their head out a car window!

Tips for Travelling with Pets

There are many means by which Rex can ride with you:

After she was comfortable with the Doggie Sandwich, we tried the Tank Dog. I put a grippy pad on my tank so Sadie could hold on better and also to protect the tank from claw scratches. (I just used the sticky mesh fabric used to line cupboards because we had extra. @electricterry uses a dog bed on his tank for his husky, Charger.) Again, she took to it very quickly! Before long, she loved standing up to smell the air, and leaned into the corners!

Now that you know how to transition your dog to a passenger, you’ll be packing dog treats along with your own snacks for your rides!

Ron did several trips with Suzi from Toronto to PEI and back! He has a great detailed writeup on how he and Suzi prepared for these trips which I consulted when I started on riding with Sadie.

Wait, is it legal to ride with a dog in Ontario?

In Ontario, there is no provision for pets in the Highway Traffic Act (HTA). However, if a police officer feels the motorcycle is being operated in an unsafe manner, they  may opt to charge the rider with "crowding the driver's seat (HTA section 162), and/or "careless driving" (HTA section 130). While the author feels it is not inherently unsafe to ride a motorcycle with a dog, it is the rider's responsibility to exercise good judgement and caution to ensure a safe and fun ride for both. Wobblycat James Bai, aka Wobblycat, knows riding. Hailing from the Greater Toronto Area, he traded in his office desk for handlebars in 2016 and is now location-independent, travelling on his motorcycle across North America, from Mexico to the Arctic Ocean and the roads (and off-roads) in between.