An inside look at trip of a lifetime fly fishing in Temagami. Elk Lake Wilderness Resort, and Temagami Outfiing Co do not disappoint. 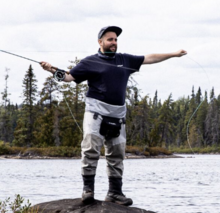 By Mitch Duesling
I co-host a fly-fishing podcast called So Fly. We travel the world chasi...

During these difficult times, getting back into the outdoors with family and friends is more crucial than ever. We need the peace and connection of the wilderness to help calm our spirits as we make our way through these uncharted waters. Northeastern Ontario is happy to announce that travel to lodges, camps, and resorts in Ontario has re-opened, and we're happy to share these stories of travel ideas with you. Please check with the local businesses to ensure they are ready to accept guests again, as it does take some time to put the appropriate safety measures in place.

Clouds of unrelenting mosquitos. Thick bushwhacking. Sticks in the eyes. Branches to the face. Cold winds that cut right through the skin, defining the phrase, “chilled to the bone.” Scorching heat, crazy humidity, a sun that won’t give up. Mud. Bog. Swamp. Beauty. There isn’t one thing I’d change about fishing in Northeastern Ontario. To say the least, it’s always an adventure.

My name is Mitch, and I co-host a fly-fishing podcast called So Fly. We travel the world chasing fish and memories, looking for experiences we can take home and share with our listeners. But time after time, we find ourselves getting exactly what we’re looking for in Northeastern Ontario. And it doesn’t take a plane ticket.

We loaded our gear into the car after work and hit the road. Leaving Toronto at 5 pm on a Friday night is never a great idea, but when you’re heading north, and I mean north, it’s totally worth it. The promise of road burgers while playing back-to-back comedy albums over the car stereo makes rush-hour traffic tolerable. For me, nature hits around Huntsville. That’s when I physically feel the stress leave my body, and my soul take a breath.

We’ve been travelling to Northeastern Ontario for about four years. The region is vast. We’ve really only explored areas between Temagami and Timmins, and yet have had so many fishing successes. The truth is, this area of Ontario is exceptionally wild, and full of opportunity to explore. Between Temagami and Elk Lake, we’ve had the chance to chase Smallmouth, Largemouth, Pike, Brook Trout, Splake, Aurora Trout, and Walleye. With seemingly endless amounts of back-lakes and river systems, it’s an angler’s paradise. Back-lakes are accessible by logging or mining roads, or you can paddle your way in.

Les Stroud, Survivorman, described Temagami to us as a paddler’s dream—a place you can spend a lifetime exploring. Rivers, channels, streams, wide-open lakes. You can paddle for days and never see a soul, your only company a few local loons. Seriously, what is better than that? And it’s far enough from the big cities that it doesn’t attract the same crowds as, say, Algonquin Park might. That’s not necessarily a good thing, but it does mean fishing pressure on most lakes is nil. We’ve driven, whacked and paddled into some spots near Elk Lake that hardly ever see anglers and had tremendous fun catching Bass and Pike, casting off islands, under the Ontario sky, laughing the afternoons away.

For our annual trips to Northeastern Ontario, we visit our friends at Temagami Outfitting Co. When looking for boats and outfitting on back lakes in Temagami, Erik at TOC has you covered. He’s incredibly knowledgeable, passionate, and well-spoken—really one of the coolest people I’ve ever met. His family runs the outfitter in Temagami right in town, and can outfit you for a seriously incredible adventure. If you want to really get into Temagami, talk to Erik. We’ve explored beautiful Brook Trout waters with Erik and have made many wonderful memories. He introduced us to Temagami, and we’re lucky he did.

Each year we also pay a visit to our friends at Elk Lake Wilderness Resort in Elk Lake. Rodger, Mary and crew are exceptionally sweet, hospitable, and kind. They get how to run a lodge and will do anything to help put you on fish. Rodger has great intel on some fantastic spots, and the gear to help get you there. Not to mention the power boats you can hop in right from the resort dock to fish the Montreal River in minutes. They have delicious food and comfortable accommodations. Oh, and they’re just super fun people to be around. We fished Aurora Trout on our last trip to Elk Lake Wilderness Resort and enjoyed more Bass than we could handle. We always love getting the chance to fish their region.

When it comes to fishing Northeastern Ontario, I’ll leave you with this. Prepare to be nimble and prepare to be alone. Bring enough food to last the day, and a couple setups to ensure you can fish different depths and styles. Being prepared is crucial, but does come with experience. The more you go, the better you’ll get. And you should go. That is, if you’re looking for adventure.

For any questions on how to plan a trip up to this region, feel free to reach out to us at sofly.ca. Mitch Duesling I co-host a fly-fishing podcast called So Fly. We travel the world chasing fish and memories, looking for experiences we can take home and share with our listeners.