Image credit
Paddling in the morning mist in 1000 Islands

How the Great Manitou Created the 1000 Islands 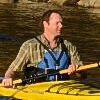 Homeland and sacred hunting grounds of the six nations, the 1000 Islands continue to majestically rise through the morning mists and her keep stories of war, romance, smuggling and exploration hidden among the labyrinth of islands.

The evocative creation legend of the 1000 Islands begins with the Great Manitou. High above the lands, soaring on his Thunderbird, Great Manitou looked down from the sky and saw that his people were fighting and destroying each other. To help them live in peace, the Great Manitou created a beautiful garden on the shores of the St Lawrence – with the warning that it would be taken away if people returned to their warring ways. The common land was to be kept sacred and no conflict was allowed among the six nations who harvested the rich soils and plentiful rivers. All went well for many years, but eventually old feuds broke out and war again plagued many tribes. The Great Manitou angrily collected the garden in his huge blanket and ascended back to his home in the sky. However, at the last moment his blanket tore open and thousands of pieces of the garden fell into the river below. As he and his thunderbird flew high over the water, each piece of the garden took root and began to grow again, thus creating the Eden-like 1000 Islands we now know today. Today, as our kayaks glide silently past the break wall of Gananoque's harbor, our adventure begins in the heart of the Garden of the Great Spirit.

The 1000 Islands offer some of the safest and most scenic paddling routes in Ontario. Be sure to pack a picnic and bathing suit as you'll want to stop at the seemingly endless bays and beaches in the 1000 Islands National Park. Paddling in the 1000 Islands is easily accessible and only a short drive from Ottawa, Toronto, Montreal and the USA. Kayaking outfitters are conveniently located in Gananoque for guided day trips, rental packages and weekend camping.

Kayaking gets you up close to everything, where the independence and freedom is unmatched by other watersports. Much magnificent wildlife call this UNESCO Frontenac Arch World Biosphere home. The dense clusters of islands make perfect stepping stones for many migratory species and with 5 overlapping eco-regions, photographers are rarely disappointed with the action and beauty of the landscapes. Aside from the majestic aura of the islands, the living history and rich lineage to Canadian settlement, war of 1812, bootlegging, shipwrecks and romantic castles will keep any history buff entertained for years. For the geologists, the 1000 Islands are made up of an ancient mountain range that spanned from the Algonquin Highlands through to the Adirondacks in the South. This 950 million year old granite was ground down by 3 glaciers, the last of which flooded the valley and left precisely 1864 islands in an 85 km stretch of the St. Lawrence River between Kingston and Brockville.

For information on guided tours, weekend camping trips and courses, contact 1000 Islands Kayaking. Day trips run from May 1 to October 31 and include all you kayaking equipment, certified guides, national park permits and a gourmet island lunch. Guided trips are youth and beginner friendly, no experience is necessary.  Many waterfront B+B's and romantic accommodations await you for your weekend escape.

If you are considering a self-guided kayaking trip in the 1000 Islands, download maps here. Information is also available to assist with route plans, rental packages, firewood drops, campsite and prospector tent reservations. Power boat shuttle services are available for transporting your equipment between National Park Islands. Scott Ewart Scott is one of Ontario's premier paddling instructors and adventure guides.  He has provided guiding and coaching experiences ranges from the remote beaches of Tofino to the windswept shores of Nova Scotia, icy waters of Lake Superior, six South American countries and mighty Colorado River.  With a background in Outdoor Education and Adventure Tourism, he now enjoys a career as owner of 1000 Islands Kayaking in Gananoque Ontario.