"Where one hears the sound of the waters"

Becky Mason shares why paddling "The Pet" is her favourite Algonquin trip. 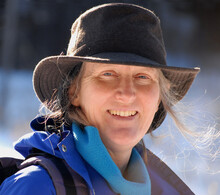 By Becky Mason
Becky is a renowned paddler, author, film maker, public speaker and instructor. She acquired her paddling passion from her father, Bill Mason.

Many consider Algonquin Park the jewel in Ontario's crown. It is indeed a magnificent destination, and for canoeists it offers an almost unlimited myriad of opportunities for adventure. The Petawawa River is my favourite Algonquin trip, especially during the shoulder seasons of spring and fall when it feels like I have the river all to myself. Over the 40+ years that I've been paddling the “Pet,” it has become a kind of touchstone for me.

Touchstones: those places or things that we return to time and time again for comfort, stimulus, and re-evaluation. Places that hold precious memories, mark life's milestones, and stir our emotions. For me some are specific spots, some beautiful memories, and some, like the Petawawa, can be as big as a river.

My relationship with the Petawawa goes way back. I can't remember the first time I was on the river, but I know that it was with my family. My dad loved this place and took us there often for weekend whitewater trips, or to film or shoot photos for his movies or books. These were formative trips that instilled within me a love for the rugged yet forgiving landscapes of Algonquin Park. Because of its proximity to our home near Ottawa, it is where I developed and refined my whitewater paddling skills.

When I was in my early twenties, Dad and I did a painting trip down the river that was, in retrospect, such a beautiful gift, as he would die a few short years later. In 1983, Dad let me invite my boyfriend Reid along for his first whitewater trip where we introduced him to paddling rapids (and swimming them!) and sleeping in a baker tent. Twelve years later, Reid and I would spend our honeymoon on the same river and in that same baker tent, reliving our past adventures and forging new ones. Since then Reid and I have returned many times to different parts of the Pet. We keep getting drawn back, sometimes every year, and sometimes after five years. But just like an old friend, no matter how long we're apart, once reunited it seems like we've never left.

So other than my personal history, what is it that brings me back? Well, this is a whitewater river. At least the bits I love best. I confess that I have never travelled the full length of the river: partly because it's illegal (after the Park boundary the river flows through the restricted CFB Petawawa military base), and also because some of the best sections of whitewater lie between Cedar Lake and McManus Lake. With rapids like Devil's Chute, White Horse Rapids, Devil's Cellar, Crooked Chute, Rollway, and The Natch, this river is a challenge for the best paddlers, but forgiving enough for novice whitewater canoeists.

The origin of the name Petawawa, is not clear but the explanation I like best is that it's an altered version of an Algonquin word meaning "where one hears the sound of the waters." On the stretch from Cedar down to Travers, you'll definitely hear the waters, as this is for more the more experienced paddler and is best done earlier in the season. But it is a beautiful, exciting ride with a bit of a respite and some great fishing at Radiant Lake.

The lower section from Travers down is the classic two- to three-day trip. We would drive up on a Friday afternoon and Dad would always want to try to camp on his favourite sand beach on Travers. Heading downstream the next day, we were always torn as to whether to camp at the last takeout to Crooked Chute or push on to the spectacular cliffs and campsite below the Natch. Either way, we were never disappointed.

At Crooked Chute, we would camp right at the river's edge and feel the Pet's true power as it violently forced its way around a dog-leg corner tumbling through rapids below. We would see many remnants from the log-driving era here, and always marvel at the old channel that loggers once blasted to straighten the dog-leg so they might more easily drive the timber downstream.

When we camped below the Natch, we would find the path on river-left and hike to the top of the cliffs for the view. It is believed that Tom Thomson painted along this stretch and it certainly always inspires me to get out the paints.

But of course it's not just the whitewater, the campsites, or even the memories that call me back. That's all part of it, but to be out on the land in the wilderness and travelling by canoe is the most beautiful, indescribable, transcendent feeling I know of. To be alone in the bush, unencumbered by the complicated trappings of modern life, even if only for a few days, is to be truly free. So I continue to return whenever I can to rediscover that feeling. And I encourage others to try it too, so that they might be as fortunate as I am, and be drawn back again and again to hear the sound of the waters.

Becky Mason acquired her paddling skills and her fondness for canoes from her father, Bill Mason, the author and film maker of the Path of the Paddle series. She continues the family tradition of sharing her passion for paddling through her canoeing courses, art, public speaking, writing and film making. Becky lives in Chelsea, Quebec with her husband Reid McLachlan. Find out more at RedCanoes.ca Must-do activities that are snow much fun. 7 Reasons to Explore Ontario This Winter

Grab your parka—it’s time to plan a snow-filled adventure. Make the most of the snow in these stunning locales.