A Snowman That Never Melts! Bon Soo Continues Golden Legacy In The Sault 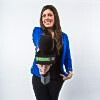 Crisp, cold air hits you as you slide down the ice-sculpted slides, and take a stroll by the artistically crafted ice sculptures. It’s a unique environment at the outdoor festival—with event goers bundled up to brave the elements while enjoying the many attractions pulled together each year by the Bon Soo Winter Carnival. It’s dubbed the third largest winter festival in the country and is the largest of its kind in Northern Ontario. The beloved event recently celebrated a golden anniversary within the community, last year marked the 50th year Bon Soo was a part of Sault Ste. Marie. Now looking to its 51st year, the 10-day winter celebration will be taking place in the Sault from February 7th-16th, 2014. The now renowned Bon Soo Winter Carnival got its start some half a century ago, as a way to energize the retail and business industry in the city, during the traditionally slow winter period after Christmas. The festival has been taking place in January or February ever since. It was Sault businessman Henry Bullock’s idea to bring this historical event in the city to life—and with help from the Chamber of Commerce, they encouraged events that already existed in the community to all come together in a Carnival format. The final product not only helped boost tourism and business during the slower first quarter of the year, but also added an event that everyone in the region could get excited about during the long winter season. As the festival continued to improve and grow each year, it became an event within itself, and required a Board of Directors and the help of countless volunteers to keep it fun and fresh every winter. Today, the carnival has grown to incorporate a variety of popular events that take place across the city, including the bum slides (snow that is sculpted into large slides located at the Tim Hortons Winter Playground), card and dart tournaments, dog pulling contests, snow machine rides, dances, and large-scale opening and closing ceremonies for the community to enjoy. One of the most popular events at the winter carnival is the Polar Bear Swim. Each year, hundreds of swimmers brave the icy waters of the St. Mary’s River, jumping through a hole in the ice into the freezing water below! It doesn’t take long for these participants to warm up though, and be on their way to check out the next outdoor Bon Soo event. Every year, Mr. Bon Soo (a friendly and fun snowman, who luckily never melts) is the conductor of the festival. He is an attraction in and of himself, with children squealing at the chance to say hi (and maybe even get a hug!) from him. He can be spotted by his large white head, red suit and hat, and shiny black boots. Although Mr. Bon Soo is the most recognizable of the people at the festival, the Bon Soo Winter Carnival is an event that takes a village to successfully complete each year. The non-profit, publicly funded festival relies completely on sponsorship and community support, and is entirely powered by volunteers (over 500 give their time each year), who ensure this annual event continues to expand and evolve in Sault Ste. Marie.

Mr. Bullock’s founding vision of getting people out of their homes in the chilly winter months and celebrating community spirit has truly been achieved with this outdoor celebration. The Bon Soo Winter Carnival is ready to welcome the world to experience the wonderment of this festival first-hand.

Also, visit www.saulttourism.com for more information on things to see and do in Sault Ste. Marie!

Jasmyn Rowley Born and raised in Sault Ste. Marie, Jasmyn’s love of communication, media & public relations literally took her across the country to pursue her passion. Recently returning to Sault Ste. Marie from Vancouver, she continues to develop her talents and expand her expertise in media and publicity. Jasmyn has been working in media and broadcasting for over eight years, on both sides of the camera, as both an on-air journalist and behind the scenes in a production and PR capacity. Jasmyn’s various roles in the industry include work as a news anchor, reporter, producer and news writer for broadcast television and radio; for which she was honored with numerous awards over the years, including CTV News Writer of the Year, Most Promising Current Affairs Producer, and Most Promising Reporter of the Year. In addition to her background in media, Jasmyn has built a vast portfolio in the public relations realm. She has completed a variety of results-driven publicity campaigns for clients, including top actors, musicians, authors, television and film productions, and high-profile red carpet events. One of the most notable projects she has worked on included coordinating a series of Vancouver 2010 Winter Olympic red carpet victory parties.