A Story of Courage, Friendship, and a Song About Ontario

This is a story about things that matter. Read on and learn about Denny's battle against cancer, the support he received from his wife and friends to visit the Canadian wilderness one last time, and the song his good friend wrote for him—and for us! 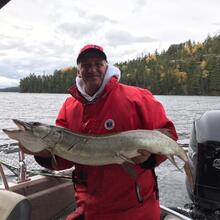 This is a story without a happy ending. But it's also a story about the tenacity of the human spirit, about a dying man's wish to see the Canadian Wilderness one last time, and about the love and support he received from his family and friends.

The Value of Nature and Wilderness Landscapes

Let's face it, we all get wrapped up in the challenges of life and it's not always easy to stop and smell the roses. But in most instances, the things we worry about on a daily basis don't really matter—certainly not in the big picture that is life. When faced with a life-changing event like a cancer diagnosis, what really matters and what doesn't quickly becomes clear. For Denny Lee and his wife Sue, that life-changing news was delivered in July of 2017—with a survival outlook of just four to six months.

Denny and his wife Sue on their last trip North

Charlie said Denny had visited Quetico Provincial Park in Ontario's Sunset Country region, having canoed the lakes in the Boundary Waters Area between Minnesota and Ontario in his younger years. Denny had no problem visiting Ontario with his wife Sue or alone, reveling in the beauty of the Boreal forest, the lakes, and the wildlife. Charlie explained Denny's deep love of the wilderness and his desire to visit Ontario as often as he could:

He and I had never traveled together to Ontario or the North Shore of Superior/Ontario at that point in time. He had told me about it for years!  He kept saying "Charlie, you gotta go man! There is nothing like it anywhere in this world!"
– Charlie Calvert, Denny's close friend
Denny with his friend Charlie Calvert near Grand Marais, MN

Back to July of 2017 and the bad news from Denny's doctor. What do you do when you get a medical diagnosis like that? Like most people, Denny and his wife Sue probably felt shocked and were not sure what to do. Given the stage the disease was at, Denny declined chemotherapy and, according to Charlie, became focused on making one last trip north to Superior's North Shore at the Minnesota-Ontario border.

That was Danny's final destination: the crashing waves of Lake Superior, the massive cliffs, the wildlife—he wanted to see all of that one last time. Charlie told me Denny especially liked Rose Lake north of Lake Superior but had also traveled to Nipigon, the Sleeping Giant. and other iconic destinations in the Superior Country region of Northwestern Ontario—regions that were out of reach for the final trip, but embedded in Denny's heart. Denny even wrote a poem about Ontario—he loved it that much!

Charlie and his wife KC, along with Denny's wife Sue, while concerned Denny was too weak to travel, set out to make the trip happen, as they knew Denny's strong will and his deep desire to see the North one last time:

While we were together in May of 2017, Denny insisted that we plan a trip to the North Shore and we made reservations to stay in Grand Marais, Minnesota for September 22-24—hoping to cross the border into Ontario on one of those days. Denny was so excited!  He literally couldn't wait for this to happen. And then... in July of 2017, Denny called me to say that his doctor had found cancer, giving him four to six months to live.  This was crushing... my heart sank and before it could sink any further, Denny said: "My brother," (which he said all the time!) , "we're going to make that trip, cancer or no cancer!"

Just before the final trip North was set to happen, the inevitable progression of the disease meant Denny needed a tube inserted into his lung to drain fluids. He got that done and without blinking an eye, left home as planned and headed north to the US-Canada border. He was so determined to go on the trip that nothing could stop him— and nothing did:

As KC and I headed that way, it was early Friday morning, Sept. 22, 2017.  The clouds were dark and it began to rain very hard. From the distance just outside of Duluth, Minnesota, it appeared to us that the weekend might be a wash-out.  We called Denny on his cell phone to ask where to meet them.  When we got there, we saw their van and pulled up beside. Denny looked so pale that I didn't think he could possibly make it any further!  We decided to let him take a short nap. After that nap, he got a little color back in his face and he said: "Let's go!"   He and Sue took us to all of their favorite spots along the North Shore up to Grand Portage, where he pointed us to Canada, the Ontario border, which was within 100 yards of where we were!

Denny getting his feet wet on Lake Superior's north shore

After his 1,000 mile trip from South Carolina, Denny never made it across the border, he was just too weak—but the fact he even reached the Canadian border in the condition he was in was astonishing. After seeing some sites around Grand Marais, Minnesota, including some waterfalls and dipping his feet in the cool waters of Lake Superior, success was the only way to describe the outcome. The two-day trip ended with some tearful goodbyes, and Charlie's words describe the somber mood:

We parted ways Sunday morning, September 24.  Had a small breakfast and stopped at a couple of more areas of his before heading out of town. We embraced and I held him gently around his shoulders and told him that I love him and that he will have a glorious journey home, where he will be reunited with his mother, who had passed when he was a teenager, as well as all of his other family members.  I told him that he will be waiting on the "other shore."  He embraced that thought and believed it, and it gave him comfort.

As Charlie described it, the inspiration for him to write the "Ontario Song" came from a conversation he had with Denny on this final trip:

While KC and Sue were conversing with each other, Denny and I had our own.  We talked about old times we had shared.  We talked about music and some of our own adventures over the years together. He was so happy that we were finally together up on the North Shore and that he was able to show me why he loved it so much. It was then that he shared a poem he had written in 1978, while camping at a nature reserve in Phoenix, Arizona of all places!

When I first heard it come out of his mouth, I was totally and completely captivated and enthralled by the words!  He had spoken a little fast, as he was recalling it from memory, and the sound of the waves rolling to shore caused me to ask him to repeat it once again.  When he did, I felt this strong prompting come over me that I just had to make that poem into a song! I couldn't wait to get home and get my guitar out and start!

After talking a little more to Denny about it, Charlie began, in earnest, to write the song based on Denny's poem. He added a verse and figured out the chords. The result was something—in the author's view—fantastic!

So I said this story is one without a happy ending. About two months after his last trip north, Denny passed away peacefully in the comfort of his family. There is a silver lining here and for that, I encourage you to think about the courage, effort, and sheer willpower Denny showed when he planned that last trip. Getting to the Canadian border after driving 1,000 miles and deciding he just couldn't go on. Disappointment? Maybe but the journey north to that Border shows the power of the mind and spirit—the essence of what matters and what doesn't.

Denny's life and his story outlined here should encourage everyone to persevere—even in the most adverse circumstances. That's what Denny did; he never considered the possibility he couldn't do something, and that last trip North is a testament to how he lived his life. In a nutshell, Denny's lesson to us is to never give up...

A moving moment—while walking along a trail, Denny recognized a tree he had walked by years before