Touring the Haliburton Highlands and Beyond

Touring the Haliburton Highlands and Beyond

Some of them you'll have heard of and others not so much. You never know what you'll find in this part of the province... 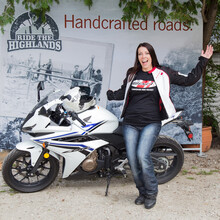 What a whirlwind of an adventure! When I left town in the dead of night, I had no idea what sort of shenanigans I would get up to over the next 5 days. I made sure to pack for all possible situations because you never know what can happen when you go on a long motorcycle trip.

Rewind a bit to 6 weeks ago. My buddy Alex won the grand prize at a Stag & Doe - a week at a timeshare in the Haliburton Highlands. I jumped at the chance to join in on this adventure, Tip #1: NEVER pass up the opportunity to go on a motorcycle trip. We trailered my 2008 Suzuki SV650 and Alex’s 1994 Triumph Trident 900 to Haliburton, Ontario, and within an hour of settling in we had our gear on and were ready to ride for the day. We looked at the online motorcycle trip planner to give us an idea of where to ride and it was quickly decided that we would head towards Alqonquin Provincial Park. We rode down highway 118, which is known as one of the top roads for motorcycling in Ontario, and continued down highway 62, 127 and highway 60 through the park.

I haven’t had much of an opportunity to ride in Northern Ontario, and I must say I’ve missed out until now! The smooth roads led us around twists and turns, through some of the most beautiful landscapes I have seen. I remember looking at the sparkling asphalt, thinking that I was in the Land of Oz and following a road to an unknown destination. Fortunate for us, the weather improved throughout the day so we had to stop to take off some layers. Tip #2: Wear Layers – the temperature could fluctuate at a moment’s notice!

Check out the new Ride the Highlands site to learn more about motorcycle routes in the area.

A moose is an animal that is both feared and respected by motorcyclists and motor vehicle operators of all types. Of course, we saw one grazing in the bush off of highway 60 as we rode through Algonquin Park. We slowly rode past the majestic creature and continued on. Up ahead, my friend pointed out a massive chunk of ice that was still melting from this past winter. Rocks, waterfalls, lakes... it was all here, in this magical park called Algonquin. We continued through the park, and made a stop in Dorset, which is located between the Lake of Bays Municipality in Muskoka. The trees were just starting to turn green, which gave us a beautiful view when we hiked up the Dorset Lookout Tower! I learned that the tower was originally built in 1922, and was used as a fire lookout tower, standing at 100 feet tall. To ride or not to ride in the rain? Well, day 2 came with an almost guarantee of rain, but we decided to take the chance and head out for the day. We packed rain gear, Rain-x for our visors, and some dry clothes and headed out along highway 118. After 40km, it started to rain but we didn’t have the safest place to stop to put our gear on. Tip #3: Put your rain gear on before it starts raining if there’s a strong chance of rain! Lesson learned there! Riding in the rain is certainly not desirable, but is something all good riders need to experience at some point. We can’t predict the weather 100%, and it’s much better to be comfortable on your motorcycle in the rain, than not. We continued on, with stops in Port Carling and Bracebridge. Despite the poor weather, I loved checking out the lower falls in the town of Bracebridge – what a site to see! Even more exciting was riding highway 141 around Lake Rosseau, located in the heart of Muskoka. This highway is listed the third best roads to ride in Ontario, and now I can see why! A rock cliff on one side of the road, with a beautiful lake on the other; the rainy day wasn’t going to take this stunning sight away from me. I was amazed, breathless, and fulfilled. My mission was complete—yet we were only halfway through the trip!  We ended the day after riding another 350km. My last day in Haliburton was a cold one! I spent the morning blow drying my boots, gloves and helmet to ensure they were dry for our third day of riding. Tip #4: Bring extra boots & gloves if you have them! When we departed, the temperature was a cool 4 degrees Celsius. We made our way down the twisting roads of highway 118, past Loon Lake. This was definitely on the top of my favourite places to ride! We rode down highway 503, and then took #45 to Orillia.

Tip #5: Regular coffee stops help make a cold day better! Regular stops for coffee were something I enjoyed that day; not only did I have the chance to warm up, but I also had the opportunity to meet some really interesting people and learn a bit of history about the area we had stopped in. One man had resided in the area for 50 years; while another woman chatted to my friend about mutual friends they both knew. Every time I visit the North, my experience is similar; I meet friendly people who take the time to talk with you and want to share their knowledge about the beautiful north. They each wished us a safe trip before we bundled up and jumped back on our bikes to continue on our adventure.

From Orillia, we rode down highway 44, towards 52. We then headed down highway 6, 20 and back down highway 118 to Haliburton. Honestly, looking back, we road down so many roads it was hard to remember them all! The beauty of Northern Ontario is consistent across every route we took. We finished the day after riding another 300 km, which may seem like a lot, but I felt like time passed so quickly! That Friday night, I checked on my bike and noticed a layer of ice crystals that had formed on the seat. I thought to myself, ‘tomorrow morning is going to be a chilly ride!’ I parted ways with my friend at 6:00am on Saturday morning and made my way to the Kawarthas Northumberland region through the Kawartha Lakes to the Town of Clarington. It was a peaceful, tranquil ride that morning; there were very few vehicles on the road, and the ride was quiet except for the throaty roar of my v-twin Suzuki.

Part 2 of my adventure was only just starting! I quickly checked in at the Stone Coach House, and made my way to Canadian Tire Motorsport Park to join my friends for the Victoria Day SpeedFest. This is motorsports in Ontario and Canada at its best! I connected with Canada’s Best Racing Team and NCATS driver Joey McColm, to help promote their new race team for the weekend. TIP #6: Plan fun activities or stops along the way! It was a blast working with this team; I immediately felt accepted and welcomed by everyone there. Their professionalism, dedication and passion for the sport is something you can’t miss when you see them hard at work. The weekend went by in the blink of an eye, and before I knew it, my adventure had ended. I rode three hours back to Niagara, and parked my bike for a good few days to give my body a break! Tip #7: Invest in a comfortable seat! Plan Your Motorcycle Trip to Ride The Highlands
>

Jess Kline Jess is a long-time motorsports enthusiast and promoter. She is owner of Backwoods Promotions, which specializes in motorsports, automotive & outdoors event staffing and marketing. When she isn't hard at work, Jess enjoys exploring the Backwoods of Ontario, whether riding her Suzuki SV650 down a winding road, or getting out on an ATV, snowmobile or boat!