"I was dumbfounded. I mean, who does something like this?" 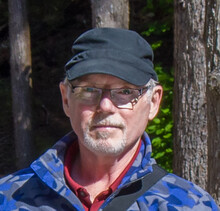 Its onshore wind blew through my thinning hair. Its waves thundered as they crashed ashore. Its spray sprinkled my camera’s lens as I tried to capture its magnificence. This was Lake Superior. I was camping right on its shore at the Agawa Bay campground, just past the Soo.

As I watched the waves roll in and the sun set, I thought about when I was a little boy at my Grandma’s cottage on Lake Simcoe. Windy days were my favourite days for swimming. We would dive into the waves, and more often than not, come up gurgling and spitting. We fancied ourselves adventurers. When we weren’t swimming, we were exploring. We’d lose ourselves playing war, flipping for who would play the good guys, or tag, or any of the games little boys play when the sun is shining, the breeze is blowing, and they don’t have a worry in the world. This was my Lake Superior adventure. And I was as gleeful as a little boy.

If you’ve done any amount of motorcycle touring, you soon learn that the vision for your trip doesn't always match its reality. This trip was no different. My V-Strom’s chain failed just as I was passing through Thunder Bay. Having problems with my chain curtailed the number of roads I could tame and the number of places I could explore.

“Merry Christmas, you can keep them.”

Kakabeka Falls Provincial Park offers campers a chance to stay overnight in paradise. As long as you can get those tent pegs in the ground. // Photo credit: John Lewis

I arrived at Kakabeka Falls Provincial Park in one piece, despite the clunking, rattling, and slapping of my chain. I was given a powered campsite primarily for camper trailers. This was obvious because it had been graded and levelled with gravel, which I quickly confirmed when I tried to put in my tent pegs. After the fourth bent tent peg and some frustration, I sat there wondering just how I was going to get my tent up. “Birnie," I heard from the campsite across the way, “where are those nails?” A few minutes later, a weathered gentleman at least ten years my senior walked over to my site and handed me six six-inch spikes along with a hammer and said, “Here, try these.” And, before he turned on his heels and walked away, said, “Merry Christmas, you can keep them.” Of course, I thanked him, but he wasn’t there to socialize, just to do his good deed and leave. He had work to do because they were heading out early the following morning. What nice people. They saw someone in need and, no muss, no fuss, jumped in to help with no expectations whatsoever. How cool is that?

The gravel was no match for my newly-acquired spikes and hammer. My tent went up quickly after that and was securely pegged, ready for anything. I cooked dinner, putzed around, and retired for the evening. I wanted to be up early in the morning to get my bike to the motorcycle shop in Thunder Bay.

My destination was Ouimet Canyon, but getting there was half the fun. // Photo credit: John Lewis

The motorcycle shop tightened the slack in my chain and assured me that it would get me home to Toronto. This was Friday, and they would be closed on the weekend. Unfortunately, the chain took a turn for the worse on Saturday, and my bike had to go back into the shop Monday for a new chain; it wouldn't be delivered until Tuesday. Such is the touring life. No worries.

Out of adversity, something good will always come

When I got back to my campsite from the shop, I met Yosef, not his real name, who shared with me that he was a retired Rabbi. He and his wife were coming east to visit their son in Montreal. He was a very thoughtful man, and somehow we became engaged in deep discussions about current issues and philosophy. We instantly liked one another. Our meeting seemed like it was meant to be. I told him about my bike's problems. He shared an old saying that went something like: Out of adversity, something good will always come. That wasn’t the only one. He seemed to have a Jewish proverb, a fable, or an old saying to cover just about everything. He was very knowledgeable and entertaining. It was a joy to be in his company.

Later, after we had each retired to our campsites, he walked over with an eighteen-year-old bottle of Scotch and asked me if I’d like to have a drink with him. This wasn’t something I could turn down. He poured two fingers into my camping mug. I later laughed because my camping mug looks small but can actually hold a large can of beer. He had given me over three ounces of Scotch, although I didn’t know it at the time. He came over later and told me that I must be in need of a refill. He was right. I let him pour. The conversation, our connection, and the shared Scotch all made this encounter special. He was a really nice man.

I clunked and rattled my bike the 216 kilometres round trip to Ouimet Canyon the next day. WOW! Ouimet Canyon was the purpose of my trip. I wasn’t disappointed. It is spectacular. It was worth the ride. It was even worth the trials and tribulations with my bike.

When I got back to my campsite, my new friend, the retired Rabbi, had left, and a new couple, Luke and Dori, had taken the site. It wasn’t long before we became neighbourly. Although I couldn’t describe it, he looked like a guy who might know his way around putting up a tarp. As it was calling for rain, I asked for his help. Not to be outdone, his wife joined in, and the three of us put up the tarp. We became fast friends, and for the next two nights, we chatted through the evening around their campfire.

The next day I clunked and rattled my way over to Silver Islet, a hamlet left over from when mining was done on a little islet offshore. It’s quaint and is now the home to a newly renovated General Store and many cottage-like homes overlooking Lake Superior. I also wanted to hike in Sleeping Giant Provincial Park, but my knees were bothering me, so I rode around and headed back.

“You can’t leave this guy without any beer.”

When I got back, I decided to walk to Kakabeka Falls, the town, to pick up a couple of beers to enjoy by the fire with Luke and Dori. On my way, I met an Oregonian, Mike, who was touring in a camper with his wife. He was interested in my camera and photography, and we chatted for a long time. I asked him the time and said, “Sorry, gotta run, I don’t want to miss the beer store,” and I hustled off, hoping to get there in time.

Later, as I sat at the picnic table enjoying one of my beers, a large white camper stopped in front of my campsite. I was curious. Did they think I was in their spot? Mike, my new Oregonian acquaintance, came around the front of his camper with a large paper bag in his hand. He must have told his wife that he may have made me late, because she insisted, “You can’t leave this guy without any beer.” So, they drove around until they found me and delivered a bag of beer, chips, and chocolate. I was dumbfounded. I mean, who does something like this? When Mike left, Dori came over with a grilled butcher’s sausage on a bun with honey mustard. She said that it was so good that I just had to try it. Really? Only in Northern Ontario.

The memories made in Northern Ontario stay with you a lifetime. // Photo credit: John Lewis

Whether it's someone giving me spikes and a hammer; sharing eighteen-year-old Scotch and good conversation; helping me put up a tarp; delivering a bag of beer, chips, and chocolate; or giving me a sausage with honey mustard because I just must try it, all of my experiences seem to prove one thing: Northern Ontario sparks the goodness in people.

I came home feeling better about the human race. And that is one reason I will jump on my motorcycle and go back to visit again. John Lewis loves telling stories that inform, inspire, and entertain. He writes about motorcycle touring, motorcycle safety, culture, travel, and more. His work has appeared in a number of national magazines including Motorcycle Mojo and The Motorcycle Times, as well as many blogs and websites.