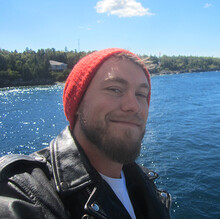 I arrived at the Tobermory Ferry early, because unbeknownst to my new friends in Lion’s Head, the ferry arrival/departure times had just changed for the new Fall season (if you’re taking the ferry, make note of that). I didn’t mind though, because I was able to get delicious and ultra-fast fish and chips from a little restaurant across the street and then take a little ride to an overlook. If you see signs guiding you to a scenic overlook, especially one with a gravel road, I suggest you make the detour and take it. I came to see some of the most beautiful views of my ride at overlooks, down little dirt and gravel roads.

When the ferry, the MS Chee-Cheemaun, pulled in, all the motorcyclists got to pull on first so that in turn later they could very conveniently exit first. Once on the ferry, they guide you into a parking spot with anchored ringlets on either side of the floor. They then, in a very motorcycle friendly fashion, provide you with free tie downs and rope so that you can secure your bike to the floor in case of rough weather on the lake. Once my bike was tied down, I headed up to the top deck of the large ferry and began my gorgeous two-hour journey across the lake. As we set out, we passed a never-ending series of green lush islands. I ended up taking a nice little nap in one of the deck chairs and waited for the ship’s foghorn to wake me like an alarm when we arrived at our destination. Biker Exodus from the Ferry

As I saddled back up and roared off the ferry with the other bikers, I followed a local’s advice and pulled over to gas up for a few minutes and let all the cars pass me. He told me the car drivers tend to hit the accelerator like Mario Andretti when they got off the ferry and tailgate you, which was accurate. When I got back on the road, which had totally cleared, I hit a few spots along my way to St. Joseph Island and Algoma Country that Dave from Taylor Made B & B had told me about. The first was a cool little pull off on Manitoulin Island called Ten Mile Point. Aside from having a cool little store that sold Native Indian crafts, it had one of the most impressive overlooks, where you could literally see 10 miles over lakes, islands, and wilderness. It was definitely worth the stop. The Surreal View From 10 Mile Point

I didn’t find the next destination that Dave told me about (and to be honest he told me he’s never found it either), but you know what they say, it’s about the journey. He told me the story about Neil Young’s famous hearse, Mortimer Hearseburg or “Mort” (French for Death) for short. Neil made the Hearse famous when he drove it from Toronto to LA. He even wrote a song inspired by the hearse, “Long May You Run”. The 1948 Buick Roadmaster Hearse’s run was long, but it ultimately met its end in Blind River, where it is rumored to still be until this day. Just like Dave I never found it, but I must admit I had a smile on my face the entire ride through Blind River hoping I’d see it. I just kept wondering if this road was the muse Neil dreamed about when he wrote his song. Could be. Carved into an overlook railing near Blind River, maybe by Neil Young, who knows?

As I cruised into Hilton Beach and unloaded into my room at the aptly named Hilton Beach Inn, the sunset continued to blow my mind. I literally just threw my crap in my room and got back on the bike and rode around the phenomenal beauty of the island for just a bit longer before I could allow myself to call it a day. When I got back to my room and opened the curtains, I realized that every room in the hotel had the same great view, overlooking the harbour full of sailboats.

I headed down to the Island Bar & Grill, which was owned by the same person as the Inn, Natalie Allard.  My reviews of both are sterling—awesome room, amazing food, and delicious local beer on tap. What’s not to love? After eating some fresh pickerel and what I later found out would be the BEST poutine of the trip, I had a couple beers with Natalie and her friends and family. They were as laidback and welcoming as you could imagine and they definitely weren’t afraid of a dirty joke; my kind of people.

Natalie told me about the many events that she has at the bar, specifically the many events she has marketed directly to motorcyclists.  Mimicking Port Dover, Natalie throws her own Friday the 13th biker rally every year at the Island Bar & Grill. My timing was unfortunate because this year’s rally was only a few days after I was to leave. She told me they had over 100 bikers last year and it was looking to get even bigger this year. Apparently Friday the 13th + Natalie’s BBQ + Natalie’s Local beer = A really, really good time. After good food and good company I headed back to my room to get some sleep and to prepare myself for the epic riding in Algoma Country that lay before me the next morning.  I opened the window to my room and listened to the water on the lake while I drifted off to sleep, thinking about my bike and the words Neil Young sang while driving across Canada, words inspired by Mort in Blind River:

“Long may you run.
Although these changes
have come
With your chrome heart shining
in the sun

Long may you run.”

For more info on planning a ride through Algoma Country and around Lake Superior, check out these immensely helpful websites that I used: Gorideontario.com, Ridealgoma.ca, and Ridelakesuperior.com Stephen Bischoff is a travel writer and the creator of the travel blog ShamelessTraveler.com.  Three years ago fed up with cubicle life Stephen set out on a journey to find something more. After signing a contract to teach in South Korea he proceeded to travel over 26 countries and 3 continents. After riding motorcycles around Vietnam, living and training with Shaolin Monks in China, and witnessing an exorcism in Mongolia his adventure continues. If you’d like to learn more about Stephen and his writings you can follow him at the social media links below.