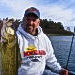 By Rob Laframboise
Rob is a competitive angler who is known as one of Canada's most successful pros.

“It’s important to me to give back to the community. I want to help kids and their families enjoy fishing and the outdoors together like I did when I was a child".

Families can kick-off the March break by enjoying the great outdoors and ice-fishing at the 10th running of the Laframboise Children’s (14 and under) Perch Derby. The popular derby is a non-profit event, held annually to promote family fun while enjoying the sport of ice fishing. In 2012 the derby had 465 children attend, and this year the derby's expecting many more participants!

This is a non-profit catch and release fishing derby with all funds directed towards the youth. In the event any funds are left over, the money will be sent to a local charity or held for next year’s derby.

For all of your Ice Fishing needs visit, Joe Sports and Surplus downtown Sault Ste. Marie or Pro Outdoor Gear! The derby will be held at the end of West Neebish Road in Laird Township (just east of Sault Ste. Marie, Ontario). Registration will take place on the ice at the end of West Neebish Road beginning at 9:00 am. The entry fee is only $5 per child, and all children must be accompanied by at least one adult. Fishing is from 10:00 am to 1:00 pm, with hot dogs, trophies and prize presentations to follow (every child receives a prize). Volunteers will be on hand to help drill holes. Rods and reels will be available (deposit required) for those who do not have their own. Live bait will also be available on the ice from True Bite Tackle and Snags.

The derby is "Catch-and-Release" to help promote conservation.

Everyone will receive a plastic bag at registration. When the kids catch a Perch they fill the bag with water to keep the fish alive, and then go to the Wacky Wings measurement station on the ice. Children can measure as many perch as they like, although only one will qualify for the top ten. There will also be a "hidden length" prize, so the more fish you measure and release, the more chances you have to win. Rob has implemented derby boundaries to keep people from venturing into unsafe areas. Sault Search and Rescue will be enforcing the boundaries of no fishing past Sankey Island. Another safety concern in years past was the parking. This year volunteers will be enforcing the No Parking along the North side of West Neebish Rd all the way to the highway. People need to be reminded that emergency vehicles may need access to residential areas during the derby.

Organizers remind families to dress children and yourselves for the worst conditions. As we know, in the north the weather can change quickly - even in March sometimes. Dress in layers so you can add or remove clothing as needed, and wear good winter boots. An extra pair of mitts and hat, as well as extra socks in the car never hurt. "This is a great opportunity to introduce your kids to fishing and have a nice day outdoors with your family." says Laframboise. The Derby is seeking your financial help to provide prizes for the children and equipment to run the Derby.

All other donations will receive their name on our flyer and on the main banner during the event.
All logos for the flyer must be submitted no later then February 15th 2014.
Please make all cheques payable to LAFRAMBOISE PRO FISHING.

All receipts will be mailed out after the derby with a thank you letter and financial report.

Visit www.saulttourism.com for packages, where to stay and other exciting things to see and do in SSM!

Rob Laframboise dove into the world of competitive fishing in the early 1990’s and has been making waves ever since. He began with the North-Eastern Ontario Bass Association (NEOBA), then later graduated to the Canadian Fishing Tour (CFT), and is currently fishing the Canadian open and the Cabela`s walleye masters circuit. Along the way he etched out a reputation as one of Canada’s most successful pros. A quick glance at some of his accomplishments shows why:

Rob has also shown himself to be a generous and community-minded individual. He started an ice-fishing derby in 2005 for children in his hometown of Sault Ste. Marie. The Rob Laframboise Children’s Perch Derby has grown to become one of the largest events of its kind. In the winter of 2007 Rob used a portion of his 2006 tournament money to buy 2 500 safety whistles for area schoolchildren, part of the Hug-A-Tree outdoor education program. He is also a fixture at many charitable events during the summer tournament season.

An employee of Canada Post, Rob Laframboise lives in Sault Ste. Marie with his wife and two children.

“It’s important to me to give back to the community. I want to help kids and their families enjoy fishing and the outdoors together like I did when I was a child".

I started the Perch Derby with almost no advertising and just a small group of volunteers to run it. I went to businesses to secure sponsorship and called the media myself. Over the last eight years we’ve seen tremendous growth with 470 kids registering last year and I couldn’t be happier.

Other initiatives such as the Hug-A-Tree whistle donation and the fish hard dream big tournament have been a joy to take part in. I look forward to doing more charitable activities in the future, both on my own and as part of the community relations programs of my sponsors.”

• Rob’s annual Perch Derby has become a fixture of March in the Sault Ste. Marie area. In 2012, 470 children and their families took part.

• Rob was a participant in 2007’s Legends on the Bay charity fishing tournament that raised funds for Toronto’s Sick Kids Hospital.

• Both Rob’s professional accomplishments and extensive charity and community work have led to him being frequently profiled and written about in a number of magazines and in the local Sault Ste. Marie media.