Searching for the Perfect Trail

Searching for the Perfect Trail

A Q & A with The Groomer Guy 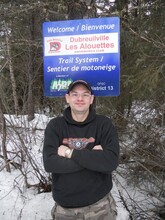 By Luc Levesque
Luc Levesque, AKA The Groomer Guy, is an avid snowmobiler from Dubreuilville, Ontario.

Luc Levesque has been grooming snowmobile trails in Ontario for over 17 years. In part through his popular blog, he’s become known as The Groomer Guy among snowmobile aficionados. But who is this “Groomer Guy,” and what motivates him to do what he does?

How did you become The Groomer Guy?

When I first started grooming, it was funny because the trails are so far and long, but I wasn’t used to them yet. I’d call the town by CB repeater and say, “Holy geez, I’ve been grooming for 6 hours straight and I’m not even near the end yet! Am I even in the right place?” I didn’t know, and in those days things weren’t so well-marked as they are now. These days, it’s not unusual for me to go out grooming for 15 or 16 hours at a time. I’ve done trips over 20 hours long. What was the genesis of “The Groomer Guy” film?

The film’s director, Marc Milliard from Collider Films, and I met at a meeting in Rosseau. Later he emailed me and said he’d like to make a film about me. I was excited. I thought to myself, sure, anything for snowmobiling. I was involved in an ATV accident years ago, just before I graduated high school. I was in the hospital for months. At the time, I’d wanted to go to film school, but after the accident I was walking with a cane for a while and never got a chance to go. So when Marc and his crew showed up, I was fascinated by all the equipment they had. This was their first time filming snowmobiles, and since I know the trails so well, I kept suggesting spots where they could set-up their cameras to great camera shots. Marc told me, “You’ve got a good eye for shooting.” That made me really proud. The filming itself was draining. Oh my god, was I ever tired! The crew shot everything, lots and lots of footage. First we did a bit of filming around the trails, before going for supper. Then we took off again around 10 or 11pm and shot all night. During the night, we got hit with one of the worst snowstorms of the season. The video doesn’t do the storm justice. It was amazing how much snow we got. This was in March. Marc was freaking out. One of the crew members asked me, “Can you even see where you’re going in front of you?” Luckily, I know these trails by heart. I could probably groom them with my eyes closed. Sometimes, when I groom farther north, I’m in No Man’s Land—no radio, no communication at all, alone in the night by myself. So I’m used to it. By the time we got back, the sun was already coming up and it was starting to get sunny. I made everyone bacon and eggs. Then we slept maybe 4 hours or so, before heading out again.

Grooming takes a long time, it’s a lot of work. The amount of time that I put in… well, I don’t do it for the money. I’ve been a municipal councilor here in Dubreuilville since 2003. During the days, I work at our family business, the local Quickee-Mart.

When I’m out grooming, a good speed is about 10 km an hour. For big hills, it’s more like 5 km an hour. Sometimes you have to get out to clear some of the snow. During big snowstorms, you have to get out and clean your wipers, your front grill, do walk-arounds of the machine to make sure everything’s working. The fastest I usually get is around 18 km an hour. While Marc was filming that night with me in the groomer, we covered about 80 km, and that took more than 7 hours to smooth out those trails. What are your favourite spots to go snowmobiling?

From Dubreuilville to Wawa is nice. Wawa has a few local loops that you can do. A lot of people go up to Hearst. One of my favourite spots is between Blind River and Elliot Lake. There’s a great trail, lots of up and down hills—it’s like a rollercoaster. The scenery is great.

Dubreuilville started as a sawmill town, so there’s lots of old logging roads. Not straight, with a lot of sweeping turns, nice surface… it makes for really great trails when we groom along those routes. In Dubreuilville, I like snowmobiling up towards Missanabie. There’s great trails along the way, and we usually stop at a place called Ernie’s. He makes really great hamburgers. That’s a favourite spot for snowmobilers.

Why should people come to visit?

First, they can come to the club and meet me. Then, they can take part in the great trails that we take so much care in. We get lots of snow and have a long season. Usually from December to April, end of March to be safe. April is bonus riding, more at your own risk. You have to know the trails. But in an average year, you can ride in April. Last year I rode in May. People here really care about the snowmobiling experience. What motivates you to be The Groomer Guy?

I do it for the riders, the people. You meet the nicest people on a snowmobile, that’s what I always say. Really, snowmobilers are such a nice group of people. They really appreciate the work that you do. I’m proud of our trails. I want to make the trails nice, because if it was me out there sledding, I’d want to have a nice experience and enjoy myself, and that’s why I want to go out and make the trails nice for people. The sense of camaraderie and community is what drives me.

I love ATVing, too. But I always come back to snowmobiling, because of all the friends that I’ve made along the way from other parts of Ontario. The people are so nice. I get to share my stories, they share theirs. Snowmobilers accept anybody, they don’t judge people. We have bankers, lawyers, arborists, people in tech securities, computer programmers, all kinds of people from different backgrounds that probably wouldn’t normally hang out together. But we get out together on our sleds and become friends.

To keep our sport strong, we need the next generation of volunteers to step up and contribute. When I volunteer, it makes me feel good to give my time and help support the snowmobile community. I love snowmobiling. I can’t see myself ever giving it up. I love it.

Snowmobiles provided by sleddealers.ca, the #1 site for new and used sleds in Canada.   Click here to see what Director Marc Milliard had to say about meeting The Groomer Guy.

Luc Levesque , AKA The Groomer Guy, is an avid snowmobiler from Dubreuilville, Ontario. He has been grooming snowmobile trails for 17 years.