Our annual pre-season prediction is in! While we may see more snow than we did last winter, you'll want to be sure to be prepared so you can get out and enjoy it while it lasts. 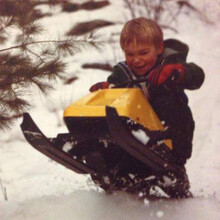 By Ryan Tarrant
Ryan is a lifelong sledhead who loves riding all over Ontario.

Update December 2021 - What is Ontario gonna get this year? Check out our predictions for the 2022 snowmobile season!

This year, the What A Ride Team asked me to step up and carry on their annual tradition of doing a winter weather forecast for snowmobiling in Ontario. Having grown up on a Georgian Bay island, we studied the weather by looking out the window. We couldn’t change it, so we happily travelled in whatever Mother Nature gave us.

Many of us Ontarians spent spring and early summer 2017 with an umbrella, or getting extra housework completed. As boating weekends seemed consumed by rain and colder temperatures until mid-July, I couldn’t help but think, “will this lead to tonnes of snow this winter?” Now I sit here sweating through a very warm late-September evening hoping for winter.

The lake effect snow blasted many Southern and Central regions earlier than Northern Ontario. It was exciting to see so many people out running trails that hadn’t seen much use in recent years. Let’s hope Mother Nature includes the South again this year so I can go down for some test rides.

Last winter’s snowfall and colder temps started in December, and some people were out testing around Christmas time. Sadly, many areas I usually ride didn’t experience cold temperatures before the heavy lake effect snow arrived. The warm temperatures limited the freezing of our Great Lakes, which likely helped with the extra snowfall.

Luckily the inland lakes were frozen solid, and even though we experienced rain and then cold temps, all in all, I did get some great trail riding in last year. It wasn’t about miles ridden, it was about days out riding.

My first ride with Shelby Mahon and Katie Erb was Abitibi Canyon on January 6th. When we arrived we found some groomed trails! Where the OFSC trail ends near Fraserdale, we discovered plenty of powder in the Canyon, enough that we got stuck! The crew at Base Camp Abitibi Canyon kept us informed that it kept snowing all winter and conditions just kept improving. I recommend watching their Facebook page this season.

In February last year, the What A Ride Team trailered up to Horwood Lake Lodge. Reading the snow conditions while driving in, I could tell there wasn’t a tonne of base. But there hadn’t been a thaw, so it was a soft base. All the lakes and swamps were well frozen, and we were treated to some cold temperatures and fresh snow while riding their privately groomed trails that are not part of the OFSC trail system. The Timmins area is a place where you can often book a snowmobile trip when snow's scarce elsewhere.

For 225 years the Farmer’s Almanac has been predicting weather patterns. It’s been years since I’ve read one, so I picked one up. Last winter they boasted and matched their 80% accuracy rate. Their General Weather Report and Forecast for this year made these points:

Then I moved to their Regional Forecast and was surprised to see their border placement and that they consider “Southern Ontario” below a horizontal line that touches the bottom of Hudson’s Bay and Includes places like Thunder Bay.

Temperature and precipitation chart courtesy of the Farmer's Almanac

Brett Anderson is a blog and environmental writer for Accuweather. He has provided good forecasting from what I’ve read, and may be someone you want to follow in the future. Historically he produces a Winter Forecast around late October. Here's his October prediction.

So my take on these sources of information is that our Great Lakes again may not freeze because of warmer temperatures. As we all know, that leads to massive amounts of snow. And our Great Lakes and 250,000 inland lakes all have high water levels this year, so we can afford to trade water for snow.

My best guess is that we'll see a lot of snow, but the warmer temperatures may mean some thaws, so take advantage and go sledding when it hits and OFSC trails are available and ready to ride! Watch the OFSC Interactive Trail Guide closely and when you see they've designated that trails in an area are ready to ride, open up the GoTour Ontario Interactive Trip planner or check out what OFSC Snow Tours are available. Just be sure to have your 2018 Ontario Snowmobile Trail Permit before you make it happen!

Watch for updates on my Random Ryan Facebook Page and I'll see you on the trails this winter! Ryan Tarrant Ryan is a lifelong Georgian Bay sledhead and boater. When he’s not punching the clock, you can find him punching through the snow and the waves. A lifelong powersports enthusiast, his work can be found at Northern Ontario Tourism, Snowmobile.com, WAR, Explorers' Edge, and on his YouTube channel Random Ryan Tarrant.