Ontario Snowmobilers in for a Great Season Ahead? Winter Forecasts for 2013-14

Ontario Snowmobilers in for a Great Season Ahead? Winter Forecasts for 2013-14 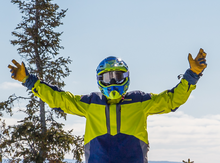 By Jeff McGirr
Jeff (also known as Lucrestyle) is a motorsports enthusiast from Northern Ontario.

Just a few weeks ago winter was the furthest thing on my mind. The snowmobiles had long been pushed to the back corner of the garage, making room for the boats and bikes. Occasionally, while working in the garage I would hear a faint whistle as the snowmobile gas tanks vented in the heat and humidity… as if they were calling for my attention. Regardless of their calls, summer toys were the priority.

Now as I sit here on the dock at the cottage on another cool August morning I can’t help but think forward to this winter! It may be because I am wearing my favourite Ski-Doo sweatshirt and I swear I can see my breath (it’s most likely just the fog clearing off the lake), but I can’t ignore some of the interesting weather prognostications that I’ve recently stumbled upon. First, there was the The Climate Depot, whose findings in the North Pole seems to suggest that we’re in for one hell of a winter: “North Pole Sees Unprecedented July Cold – Arctic Sees Shortest Summer On Record — ‘Normally the high Arctic has about 90 days above freezing. This year there was less than half that.’ Does this recent information mean that we are in for a “severe” winter here in Ontario? Quite possibly it could. I recognize that there are many articles and data sets available that will convince you that winter will soon be non-existent, however I am confident that my children will have to walk both ways up hill in a snowstorm on their way to school just like I did growing up.

You should know that I am not a meteorologist. I honestly do not enjoy talking about the weather unless it’s a forthcoming blizzard that will result in an abundance of powder, however when I read that the Arctic has seen one of the shortest summers on record with less than half of those days being above freezing it fuels me into an enthusiastic fury of, “I better order those snowmobile parts now”. Then again, sometimes the meteorologists themselves aren’t the most reliable of folks either. Over the past couple years, forecasters from both Environment Canada and The Weather Network have made forecasts that turned out to be less than entirely accurate. Still, the truth is, we’ve had a string of relatively mild winters recently, and I think we’re about due for a real winter, real snowfalls and (hopefully) powdered trails. The other weather factor that us snowmobilers have going for us is the change in the Pacific Ocean oscillation. Since the 1970’s, El Niño’s have dominated, resulting in warmer temperatures. This era is over and we have already started (since 2010) moving into La Nina’s, which should be followed with bitterly cold winter weather, at least according to Joe Bastardi.

The winter of 2012-2013 was odd. Weather systems offering no consistency over the long term resulted in varied conditions across the province of Ontario. However, overall the season was actually quite good and even offered riding opportunities into late April in Northeastern Ontario. With the current trend of a cooler than average ‘summer’ in the Northern Arctic, the Pacific Ocean’s oscillation, not to mention the fact that I am wearing a sweater while having my morning coffee on the dock in August, I think there’s a good possibility that we may be riding the smooth ribbons of snow that form the Round Algonquin Park and Gold Rush Tours earlier than expected, and for longer than we have experienced in recent years. Looking forward to getting geared up—see you out there!

Jeff McGirr I'm a motorsports enthusiast who loves the outdoors and Northern Ontario. I share my adrenaline-filled activities with the world via my YouTube Channel! Sleds, bikes, boats and more I'm in pursuit of the best adventures and love sharing them with you!