Did you know it's the largest lake fully within Ontario's borders?

Known for its dramatic and lush landscapes, towering cliffs, ample wildlife, and even a 1980s TV series—here are some facts about this massive lake. 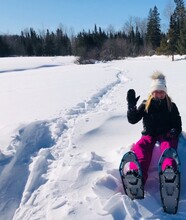 By Shalane Sarrasin
Shalane is a staff writer at Superior Country.

Due to its size, Lake Nipigon is often referred to as the sixth Great Lake of North America. While this lake is very well known, here are some facts that you may not have heard about Lake Nipigon.

1. it's the Largest Lake in Ontario

Lake Nipigon is the largest lake entirely within the boundaries of the province of Ontario. The maximum depth is 165 metres (540 feet) and has a surface area of 1872 square miles.

There are many islands on Lake Nipigon—the largest island is Kelvin Island, other large islands include Murcheson, Geikie, Shakespeare, Caribou, and Murray. Moose are known to swim over to the islands from the mainland in the spring. They do this to give birth to their calves on the islands as it provides a safer distance from predators such as black bears and wolves. Although the predators may swim across to follow, the islands can provide a brief opportunity of safety for a cow and newborn calf. In short, it gives them a better chance at survival. They will swim back to mainland in mid summer or fall.

3. it's the largest tributary to Lake Superior

4. the shores of lake Nipigon are home to a large Indigenous Population

For the Ojibway people, living on Lake Nipigon is a way of life and part of their culture. Many residents depend on Lake Nipigon for their food and income. Many were, and still are, commercial fishermen and fur trappers. Lake Nipigon traditionally provided a life of subsistence and tradition connected with the land and water.

5. Norval Morrisseau grew up on the shore of the lake

Norval Morrisseau was born March 14th, 1933 in Fort William (Thunder Bay). His early childhood was spent at the Sand Point Reserve, Bingwi Neyaashi Anishinaabek First Nation, on the shores of Lake Nipigon. He was a self-taught artist, founded the Woodland style of art and was a member of the Indigenous Group of Seven. Given the spiritual name Copper Thunderbird by his Nation’s elders, he was known in the art world as the “Picasso of the North”. Norval died on December 4th, 2007, at the age of 74.

An original Norval Morrisseau painting entitled “Great Spirit Bear” (c. 1962) can be viewed at the Nipigon Public Library at 40 Front Street, Nipigon, ON.

6. it has three Hydroelectric dams

Water travels between Lake Nipigon and Lake Superior is impossible as there are 3 hydroelectric dams on the Nipigon River that hinder navigation. Portaging routes are available. The Cameron Falls Dam was built in 1918, Alexander Dam was built in 1930, and the Pine Portage Dam was built in 1950. These dams are maintained and operated by Ontario Power Generation.

7. the lake is known for Excellent Fishing

Lake Nipigon is a fantastic fishing spot. The most popular species anglers go for include northern pike, walleye, lake trout and brook trout. Although the hydro dams ever changing water level and flows affected fish populations, in particular the decline of the brook trout population, there is a plan put in place and conservation efforts to support the brook trout's comeback.

8. the lake has lots of Pelicans

Lake Nipigon supports a pelican population and habitat. You may have seen these elegant giants flying or swimming on Lake Nipigon. You may have even wondered, what is this big white bird? It is the American white pelican. They are one of the largest birds in North America. They are white with black wing tips, only visible when flying, and have long yellow beaks. Their wingspan can reach up to three metres. In Ontario, the American white pelican breeds and nests primarily on two lakes in the Northwest—Lake of the Woods and Lake Nipigon. But be cautious if you see one: any disruption or disturbance of its habit or coming within 300 meters of a pelican nesting colony, including on water, can result in a warning or a charge being laid. The species has been moved up from its endangered designation to a "species at risk."

Spirit Bay was filmed on Lake Nipigon in the 1980s

The First Nations CBC television series Spirit Bay was filmed on Lake Nipigon at the ‘Biinjitiwaabik Zaaging Anishinaabek First Nation Reserve (Rocky Bay First Nation, MacDiarmid) from 1982 to 1987. Some of the many notable Indigenous actors in this series include Graham Greene, Tom Jackson, and Tantoo Cardinal. The theme song was written and sang by the legendary Buffy Saint-Marie. It was the first true Indigenous series that showcased the talents of many Indigenous actors. The show focused on the lives of some of the community members of the Ojibway of Rocky Bay—follwing the characters as they adapted to modern society while keeping their traditional ways of life. This includes a connection to nature and life on Lake Nipigon via trapping, hunting, and fishing.

bonus fact: there are 2 Spirit Bay namesakes on lake Nipigon

The Rock Bay elementary school and local gas station were named after the Spirit Bay show!

To plan your own fact-finding (or fishing) adventure to Lake Nipigon in Superior Country visit us here. Lake Nipigon: Land of the Giants
>

Shalane Sarrasin Shalane is a staff writer at Superior Country. She has spent most of her life in Nipigon. She loves to acrylic paint trees and landscapes. Shalane loves boating, hiking, fishing and camping. Her favourite season is winter and enjoys the beauty of being outside in the snowy landscape cross country skiing, snowshoeing or ice fishing with her husband and son.