It is the longest continuously running event of its kind along the north shore of Lake Superior.

Close up of a Nipigon River Salmon • Credit: Photos by Gord Ellis 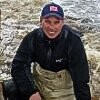 Gord Ellis is a lifelong resident of Thunder Bay, Ontario and a full time journalist, broadcaster and professional angler.

Labour Day signals the end of summer, but the September long weekend is one to celebrate here in Northwest Ontario especially if you are heading to Nipigon, Ontario.

The Northwest Ontario town at  the junction of Highway 11 and 17 east of Thunder Bay is famous for its fall fishing starting with the Nipigon Fall Fishing Festival on the Labour Day weekend. This event has a long history celebrating 53 years in 2017.

Great Memories at the Derby

There are few places more delightful for fishing than the lakes and rivers on the Lake Superior north shore around Nipigon. As a kid, I remember the fall derby focused on catching the legendary speckled trout of the Nipigon River. In the 1980s, due to concerns about conservation, the event moved away from brook trout and began to focus on chinook salmon. The Nipigon River has one of the very best salmon fisheries on the Canadian side of Lake Superior, and big chinook start rolling into the river as early as July. By the end of August, salmon are everywhere in the river, and there are some tackle busters. It can make for a truly great fishing experience on an incredible body of water. One memorable afternoon at the derby happened a few years back on the last day of the event. There were only a couple of hours to go and we had yet to catch a fish. My partner and I began trolling a deep hole with #9 silver Shad Raps. As we dropped the boat back towards  the lip of the pool, something grabbed my lure and started running. The big chinook used the impressive current in the river to peel nearly all my line off.  After about ten minutes, I regained the line back and the big fish tired. It finally surfaced, flashed a wide silver side and was netted. Our jaws dropped. At the weigh in scales, the salmon pulled the pin to 19 pounds. We had top spot at the derby for a while, until some guy came in with a 23 pounder. There are big salmon to be had, although the average Nipigon fish is between 8 and 11 pounds.

Many Prizes at Family Fun Event Needless to say, fishing derbies remain the core of the Fishing Festival and there are two to enjoy. The two-day family derby runs Saturday and Sunday, while Monday features a Huck Finn derby.

Tickets for the Family Derby are $25 and must be purchased before noon on Saturday. Tickets are available at Mannila's Home Hardware, the Nipigon LCBO and D&R Sporting Goods in Thunder Bay. Prizes are awarded for the top three in each category plus mystery prizes Sunday at 5:00pm in the Arena.

Monday's Huck Finn is open to any child 12 and under  for a $3 entry, payable upon entering a fish. There is one entry per child allowed. Weigh in is at the curling club on Sunday afternoon.  The Huck Finn is open to all species, but only the largest perch entered wins the annual trophy plaque and bragging rights.

A Weekend of Great Fishing and Entertainment

If you just want to relax or party, Nipigon is the place to be on the Labour Day weekend. You can enjoy fireworks Friday, take in a dance Saturday, watch a movie outdoors Sunday and wrap things up with draws and prizes on Monday.